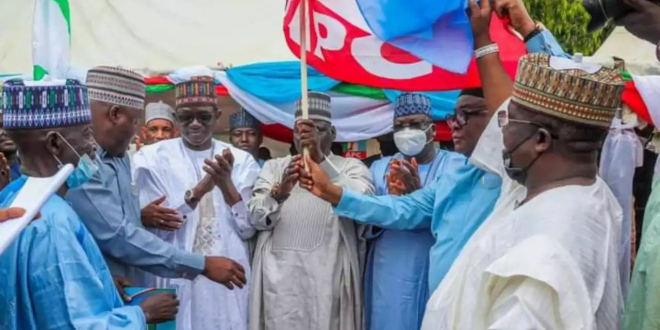 Justice M. A. Sambo of the Bauchi State High Court, having listened to and considered the submission of Nasiru Balanmalam Esq. learned counsel for the Plaintiffs/Applicants and the application having complied relevant rules of court and also has merit gave an order for an interim injunction restraining the 4th Defendants Babayo Aliyu Misau from parading himself in whatsoever manners or means as the Bauchi State Chairman of the APC, the 1st Defendants/Respondent pending the hearing and determination of the motion on notice already filed before the court.

The judge also gave an order restraining 1st, 2nd, 3rd, and 5th Defendants/Respondents in the interim whether by themselves, agents, privies, cohorts, and/or representatives in whatsoever capacity from according Babayo Aliyu Misau, the 4th Defendant/Respondent recognition as the Bauchi State APC, the 1st respondent chairman pending the hearing and determination of the motion on notice filed before the court.

The matter is further adjourned to 12th January 2022 for hearing.

It would be recalled that last week another chieftain of the party, Hassan Mohamed Sheriff, also approached the court asking for an interim order restraining the same Babayo Aliyu Misau from parading himself as the chairman of the party which the court also granted.

It is on record that the Bauchi State All Progressives Congress, APC, state congress that has snowballed into crisis has brought about the emergence of two factions, during the just-concluded State Congress.

One of the factions led by Basayo Aliyu Misau is believed to be backed by the Education Minister, Malam Adamu Adamu while the second faction led by Sunusi Aliyu Kunde is backed by Hon. Yusuf Maitama Tuggar, Nigerian Ambassador to Germany.