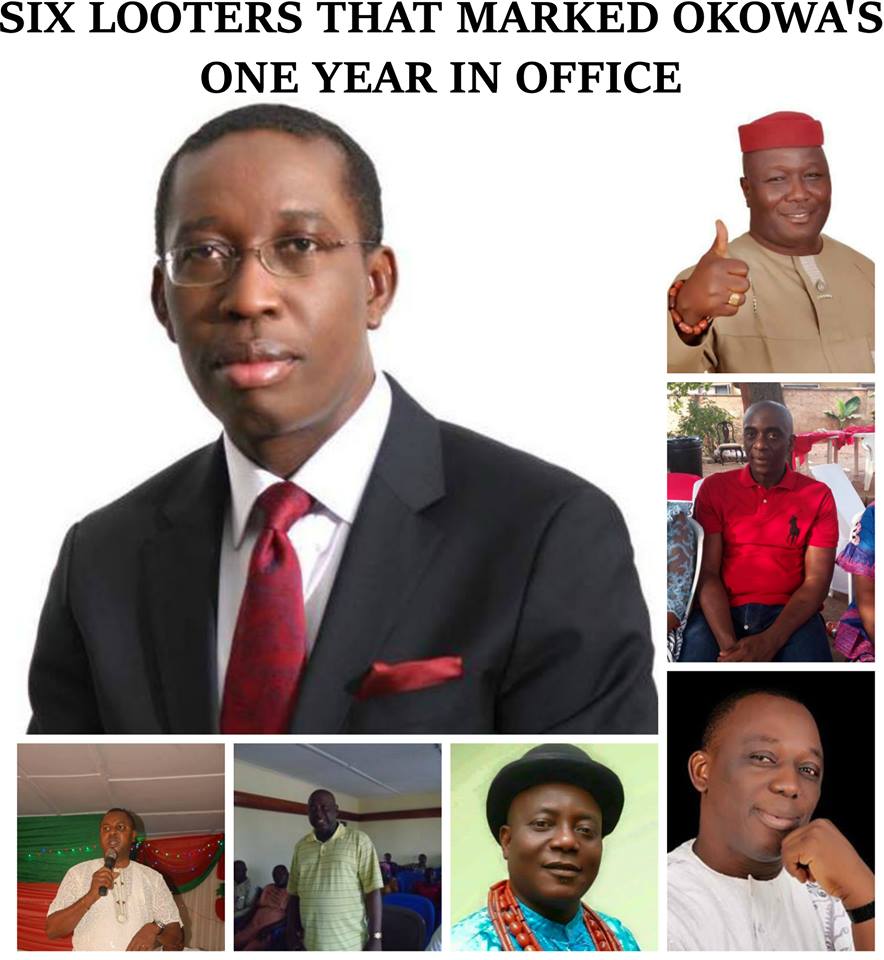 They are the worst among men; fit for the prison walls. Honor and integrity is an abomination to them, just as good name is a taboo to their soul. They have corruption running as blood in their veins; they have in their DNA ‘looting without mercy’. In the cabinet that makes up the Delta State Government, which includes the executive, legislature and judiciary, we present to you the six evil apostles representing the twelve months which the current governor, Ifeanyi Okowa is celebrating his one year in office. We bring to you the men of dishonor who are not fit for political offices in the SMART agenda of Okowa.

1. Chinedu Ebie: This Delta State Commissioner for Basic Education needs no serious introduction to Nigerians. He ought to be rotting in jail with James Ibori, but was removed from the case in a masterstroke that beats legal imagination. There was great expectation that he would have repented of his corrupt practices, but hell no; he has been baptized with corruption and therefore must die with it.

His coming into Okowa’s cabinet has the hand of Ibori written all over it and therefore can steal with impunity. “Who Ibori brings, who can challenge” is the unspoken word that has given him the license to run wild with stealing state fund. In just one year, he successfully defrauded Primary school teachers in the state of N120,000 each, with the pretence of giving each of them laptops. This systematic government robber ended up giving them laptops not worth N50,000 and smiled to the bank.

If you think that was all he would do, then the state was in for a shocker. In a speed of light, he descended on Secondary school teachers by deducting N8000 from each of them in the name of biometric verification. Delta State became the first state where teachers pay for verification exercise that is free in all ramifications. While the state government kept quiet, Ebie smiled to the bank on this two occasion with over N1 billion.

2. John Nani: He’s a silent looter, right from his days as Majority Chief Whip, House of Assembly before he was appointed as Commissioner for Environment by Okowa. The Jesse born politician has cleverly defrauded the state government millions of Naira in the name of environmental sanitation. In one of his secret deals that made he smiled to the bank, an anonymous source narrated how an oil spillage in a community made the company paid millions of Naira to him to avoid political witch-hunt, and this money was never made known to the governor.

Nani like many other corrupt leaders gathered unintelligent ‘yes men’ to himself, who just keep praising him while he gives them peanuts from the money he’s stealing to enable him re-contest for the House of Representatives election in 2019.

3. Andy Osawota: Right from his days as pioneer secretary of DESOPADEC, he has been corrupt. His breath oozes corruption; his action portrays fraud and even his inactions show a merciless looter. In just few years in DESOPADEC, he acquired so many properties worth billions that demands that he be thrown into prison.

His current portfolio as Chairman, Delta State Polytechnic, Oghara governing council boss has opened another avenue for him to continue his looting spree. In one of his corrupt statement when he was appointed, he said “This is my farm and I must cultivate it well”, and truly he has ‘cultivated’ it well, alongside the Rector, Mrs Clara Sogbaike who is the pipe for siphoning the institution’s money. Both of them currently hold the key to the schools money room and they have not wasted time in issuing themselves various cheques running into million.

4. Peter Mrakpor: He ought to be a man of God, but this Delta State Commissioner for Justice and Attorney General has thrown the bible away in pursuit of immorality. A lover of things on skirt, many ladies attested anonymously and good at carrying out vengeance for no reason.

His ascension to the position is tied to the fact that he’s the governor personal lawyer but that is on professional basis, which many agrees that he’s good at, but the governor cannot be held liable for his indecent lifestyle or his snaky plot of allegedly bribing a judge during the election tribunal cases to rule against a supposed political ‘foe’. In a sane society, Mrakpor should not be seen ten feet near any political position, and it may soon be so, as the dust is already gathering that may consume him soon. Only a matter of time, but the report that will nail him is already in the offing, authoritative sources have revealed.

5. Smart Ikem: Call him the youngest looter or aspiring criminal and you are not wrong. A certified bootlicker who specializes in praising the governor because he was appointed as board member of the Delta State Technical and Vocational Board. If anyone should be sacked by the governor, Smart should get the axe as he has contributed nothing to the board or government since he was appointed. While others are busying with why they are aides to the governor, he spends his time writing irrelevant sycophantic issues on his unpopular Facebook timeline.

Contrary to his oath as an appointee not to show favoritism, Ikem is a gangster of nepotism as he hijacked a social media paid position for his wife who is doing nothing online, leaving out the main boys doing the work. He has already registered a company against the laws of the land, that will be used in getting contracts from his board, but all eyes are on the Executive Secretary, Michael Akpobire if he will pander to this new embryo looter. His continuous stay in the board is minus one to the state.

Previous LIKE SARAKI LIKE BOKO HARAM: BOTH AGENTS OF DESTRUCTION PART 1.
Next DMO DG SAYS DIVERSIFICATION OF ECONOMY BY FEDERAL GOVERNMENT WILL STRENGTEN NAIRA, FOREIGN RESERVES