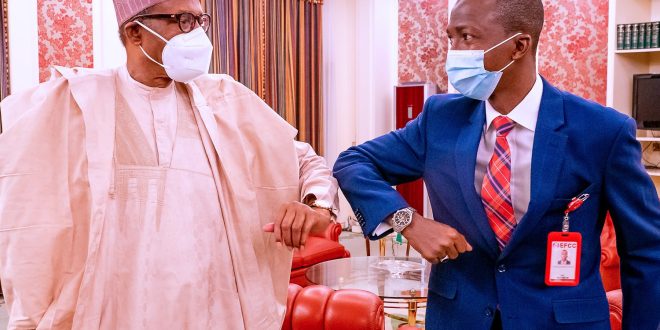 The early submission of the proposed 2022 budget of N16.39 Trillion by President Muhammadu Buhari, no doubt, is starting to raise dust.

Just like previous budgets, the 2022 proposed budget, which has since received commendations from different quarters in Nigeria as a move that will not only fast track the much needed economic growth but will also facilitate the smooth operation of many MDAs in 2022 after being subjected to scrutiny, appears to contain loopholes through which taxpayers funds could be diverted into private coffers SecretReporters uncovered.

Ranking high on the list of frivolous items in the budget is the proposed expenditure by the Economic and Financial Crimes Commission (EFCC), chaired by the young and energetic Abdulrasheed Bawa, who assumed office on February 24, 2021.

According to the proposed budget, the EFCC, not minding the economic crunch in the country, penned down the sum of N362,075,000 (Three Hundred and Sixty Two Million, Seventy-Five Thousand Naira) for the “purchase of various office furniture and fittings” with code ERGP15168199. The budget also revealed the plans by the commission to purchase a Sharp 646 Photocopying machine at a ridiculous amount of N100,000,000 (One Hundred Million Naira) with no specific number of the equipment to be bought listed under the project with code ERGP15168212.

Another item seen on the list perceived to be a yearly tradition in the eagle-eyed commission is the “purchase of computer software/hardware acquisition and software licenses” with code ERGP15168243, budgeted at the sum of N291,552,850 with no specific number of software or licenses to be purchased or renewed provided by the commission for this.

These items SecretReporters learned hints on a possible conduit to divert taxpayers’ funds by the commission renowned for its clampdown on cybercriminals and financial crime perpetrators in Nigeria. Budget experts and civic organizations in Nigeria like BudgIt have also opined that earmarking such amounts for these projects is exorbitant and could give room to misappropriation of funds.