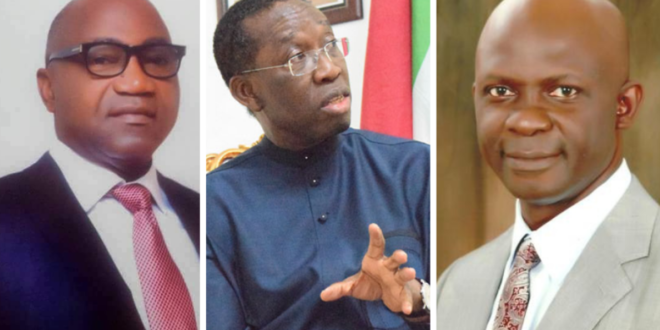 Sheriff Oborowheri who is one of the frontrunners for the Delta State governorship election is heading for the political rocks, SecretReporters can report without being challenged.

In a dramatic twist of political somersaults, the state Governor, Mr. Ifeanyi Okowa has continued his plot of dumping Sheriff like we exclusively reported few days ago by bringing out his recently resigned Chief of Staff, Festus Agas, and his joker card against James Ibori.

To keep Agas behind the scene, we gathered that Okowa told his kinsman, Victor Nwokolo, who represents Ika Federal Constituency in the National Assembly to be the secret man behind Agas. In doing this, Nwokolo was used to return the form after we exposed Agas buy of the gubernatorial interest form.

Inside the PDP national secretariat in Abuja, Victor Nwokolo’s name is listed as the third person to have picked and submitted the governorship expression form, a curious move that threw even the party leadership into confusion over Okowa’s game plan. Victor Nwokolo signed the space for the would be candidate of the governor. Others who we sighted as submitting their forms are Sheriff Oborowheri, Kingsley Otuaro, Bradus Angozi, David Edevbie, Peter Mrakpor, Ejaife Odebala while the trio of Senator James Manager, Kenneth Gbagi and Fred Majemite are yet to submit their forms on Monday.

Previous Exclusive: Ibori Walks Out On Gov. Okowa At Stakeholders Meeting After Warning Them To Behave
Next Greedy Politics: Oshimili South PDP Rejects Candidate Imposed by Gov. Okowa Through Ejele