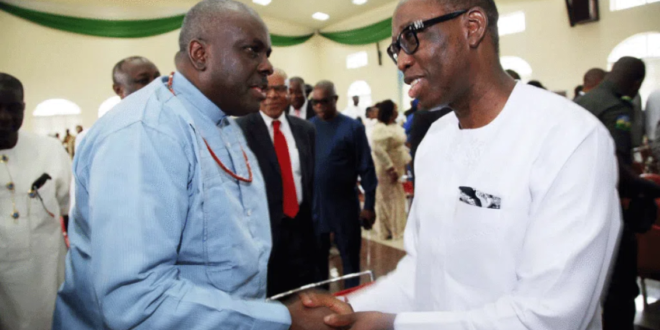 Exclusive: Ibori Walks Out On Gov. Okowa At Stakeholders Meeting After Warning Them To Behave

The big masquerade in James Ibori was unleashed today in Delta State Government House during the caucus delegate meeting which was called by Governor Ifeanyi Okowa, sources have told SecretReporters.

In what appear to be his first public lashing of his political godson, we gathered that Ibori warned the politicians in the meeting which included immediate past governor Emmanuel Uduaghan not to hijack the process but to allow the leaders of the wards to pick the three allocated delegates.

Ibori who spoke with control narrated to them the history of the party and how it has always been done, which must not be jettisoned under Okowa, stated a source to us.

Immediately after speaking, he walked out of the meeting, telling them that he has a flight to catch, leaving Okowa and other caucus members stunned.

We gathered that Okowa told the stakeholders on his sincerity to allow for a free process towards the selection of delegates, pleading that it should not be manipulated from Abuja, a move he suspects Ibori will do. Multiple sources confirmed to SecretReporters that Ibori has successfully blocked Okowa from using the national leadership of the party to carry out his wish and will now use the state leadership through the Chairman, Kingsley Esiso to select leaders who will bring delegates loyal to the Governor.