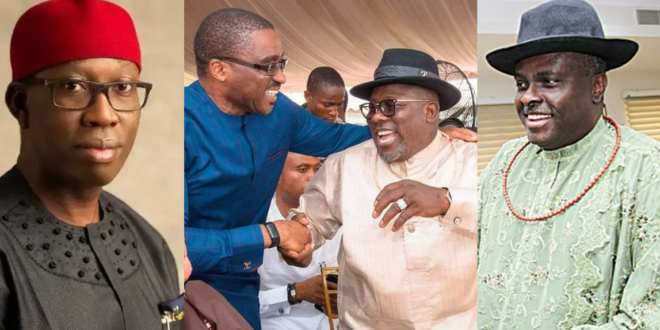 In a move to see his Plan A candidate, Rt. Hon. Sheriff Oborowheri sails through in the PDP primaries, Okowa will be finalizing how to hijack the composition of state, zonal, local governments and ward ad-hoc delegates to the state PDP primaries which will also be used to bulldoze his preferred aspirants for National Assembly and House of Assembly on the party tonight in government house.

Inside sources in the state PDP caucus and Government House, Asaba, revealed that this is the main agenda of the State PDP Stakeholders meeting which has been called for Tuesday, April 5, at the Unity Hall in Government House.

According to our very credible sources, the governor’s plan is to invite regular and identifiable members of the state PDP Stakeholders as a smokescreen but will overwhelm their number with a selection of loyalists from the local governments, including recently resigned Commissioners, to push through a vote on the process of the composition of ad-hoc delegates that will sustain the usage of the old Electoral College which is in the grip of the State Executive Committee controlled by the Governor.

The plan is to ensure that the ad-hoc delegates from the wards, LGAs and state would be shared to only persons whose directions on the aspirants have been determined.

The sources say well established and truly democratically minded party leaders and elders will be eliminated from the selection of LGA stakeholders to ensure that the one way plan is not challenged by them at the meeting.

What this implies is that true democratic process of electing ward and LGA ad-hoc delegates would be abandoned as party members will be disenfranchised, sidetracked and rendered impotent in the affairs of the party by the governor in a bid to outdo Ibori and his choice candidate, David Edevbie.

Part of the plans to influence the primaries across the state is also to deny the issuance of the new PDP membership card to some automatic delegates who have been identified as independent minded. Our sources say plan which is designed to make it difficult for such automatic delegates to attend and vote at the state elective congress is already being executed across the wards and LGAs.

Others include serving and former National Assembly members, all former Presiding Officers of the State House of Assembly, all Local Government Council Chairmen, all Local Government PDP Chairmen, all Governorship, National Assembly and State House of Assembly aspirants, all serving Commissioners, all former members of National Executive and National Working Committees, and selected stakeholders of the PDP in the LGAs.

The Tuesday meeting will see Okowa becoming the supreme godfather of Delta politics as he will successfully drive through the choice of his candidates by singlehandedly picking all the elective positions.

Below is the notice for the meeting.

NOTICE is hereby given to the underlisted PDP STAKEHOLDERS for a very crucial meeting scheduled as follows:

Previous Exclusive: Gov. Okowa Plays Smart One As He Secretly Buys Form For Festus Agas To Push Out Sheriff Oborowheri
Next Exclusive: Ibori Walks Out On Gov. Okowa At Stakeholders Meeting After Warning Them To Behave