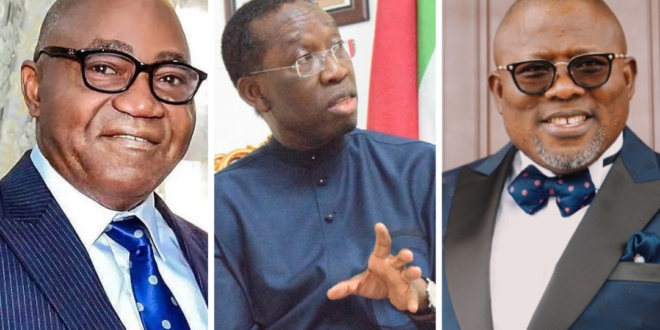 Exclusive: Gov. Okowa Plays Smart One As He Secretly Buys Form For Festus Agas To Push Out Sheriff Oborowheri

Sheriff Oborowheri may be kissing his gubernatorial ambition goodbye as information gathered from insiders within Governor Ifeanyi Okowa’s kitchen cabinet is likely to be dropped in a frantic last minute bargain by the sole political godfather of Delta State politics, Chief James Onanefe Ibori.

SecretReporters exclusively gathered that the national chairman of the Peoples Democratic Party (PDP), Iyorcha Ayu told Okowa pointblank to go and make peace with Ibori if his choice candidate in Sheriff must fly, an advise which Okowa is considering.

This advise we gathered led to Okowa telling his Chief of Staff, Festus Agas, to resign his appointment and gave him money to secretly buy the gubernatorial form in order to beat the expiry date. The move by Okowa is to present Agas to Ibori as their consensus candidate, considering the fact that Agas was a member of the Ibori political family in 1999 before his utmost diehard loyalty to Okowa, which Ibori can never get from him.

With this Maradona move, Sheriff will have to be dumped for Agas to fly, if Ibori cave in to Okowa’s political chess play that will still see him controlling the political future of Delta State if his new godson Agas flies the ticket. SecretReporters gathered that the erstwhile Chief of Staff has been the choice candidate of the First Lady, Dame Edith Okowa, who shares an excellent relationship with Agas’s wife, Mrs. Kevwe. She has always told the husband of her desire to hand over the First Lady title to her friend, stated various sources to SecretReporters.

Findings by SecretReporters revealed that Ibori has sworn to ride or die with David Edevbie who he believes has the capacity to lead Delta into the vision he has in 1999. “It is Edevbie or no one else. Ibori loves Delta State and believes that only Edevbie or Ovie Omo-Agege has what it takes to truly navigate the political and economic future of Delta State. You know Agege is still loyal to Ibori despite being in APC. And Oga is ready to work for Agege and deliver him as the next governor if Okowa insists on forcing his candidates on him” , stated a source in Ibori’s camp.

This online newspaper further gathered that Agas has been lying about the reason for his resignation citing the need for resignation as stated by the new electoral law. Agas as former Deputy Speaker of the Delta State House of Assembly is a statutory delegate and is not required to resign by the law.