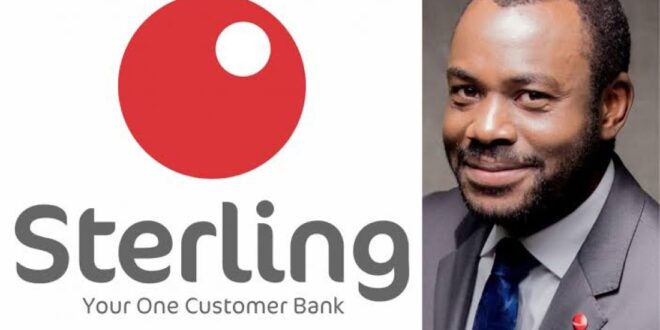 With a name that bears resemblance to ‘Stealing’, Nigeria’s third-tier bank Sterling Bank is steering its operations towards crime that will see Nigerians become victims of what they never signed for.

Eatrich Farms and Food Limited, an agricultural investment company that crashed after bolting away with over N25 billion belonging to over 250 investors according to a news publication cited by SecretReporters.

What Nigerians may not know is that the Abubakar Suleiman-led Sterling Bank may have connived with Sam Afolabi who owns the investment company to put more people into their death trap. Afolabi has since bolted and is nowhere to be found.

The latest twist to this Ponzi scheme carried out by Eatrich is the revelation by a former employee of Eatrich, Mr. Oladotun Jedidiah of how its former employer forced staff to open an account with Sterling Bank.

Apart from opening the account, they were all asked to apply for loans from the bank, which they did. Most of the staff later refused to continue with the loan application which they made known via the official WhatsApp group created for staff.

Despite their refusal to apply for the loan, Sterling Bank went ahead to credit them the amount never requested. According to Jedidiah, he got N2.2M credit alert, but before he could say, Jack Robinson, the entire money was moved into Eatrich’s account in the same sudden manner with which the money entered his bank account.

Sadly enough, while Jedidiah and his colleagues are listed as the primary beneficiary in the books of Sterling Bank, they will have to pay the money, even when the bank moved the money from their account to Eatrich, their crime partner.

Previous College Of Criminals: Delta Gov. Okowa’s Key Men Buy Caribbean Citizenship For N145 Million Each To Jet Out Next Year For Fear Of EFCC
Next Exclusive: Gov. Okowa Plays Smart One As He Secretly Buys Form For Festus Agas To Push Out Sheriff Oborowheri