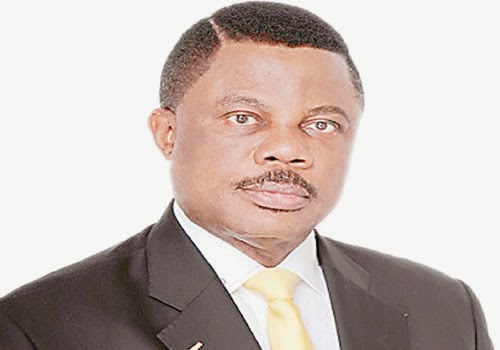 THE MANY SINS OF GOV. WILLIE OBIANO AND THE SHADOWS HAUNTING HIM

“You’re not to be so blind with patriotism that you can’t face reality. Wrong is wrong, no matter who does it or says it.”
Malcolm X

“Give a person a big name and you will end up killing him/her fast” goes a popular saying in Urhobo land. If there is anyone who this aphorism aptly fits in Nigeria political firmament; such a person is Governor Willie Obiano of Anambra State. No one expects less, especially as he came into the political theatre, a kindergarten who was not even allowed to suck the political breast milk before being enrolled into the school of politics.

Do we blame him? No! Who then should take the blame for foisting on the good people of Anambra State a man who never dreamt in his wildest imagination that he would ever be a councilor, but finds himself in a shoe bigger than him? The only man we can point all five fingers on for imposing a political cripple on Anambra people is no other person but ex Gov. Peter Obi. It is his misdeed that the State is paying for today, for daring to impose his stooge who he felt will cover his misdeeds while in power; and good enough, he will be having nightmares daily for ever bringing out Willie to succeed him. He is reaping the sins of the father and so let it be.

Rather than settle down to governance, Willie has only hired a team of faceless group who instead of advising him to focus on what their principal was employed to do, they have chosen to sell their souls to the devil in connivance to cast aspersion on a well meaning journalist like me who is known for being the eyes of the people in Anambra State right from the days of Obi. They claim that I was being sponsored by Peter Obi and Hon. Uche Ekwunife to bring down the government of Obi through the media. So myopic they must be to forget that I was the thorn in Peter Obi government, right from when he kidnapped Mokwe Bonaveture and got him incarcerated. Their memories failed them to remember that it was during Obi’s reign that I exposed a secret document signed by Willie to pay N5.6 billion to the All Progressive Grand Alliance (APGA) in his four years tenure. As for Uche Ekwunife, I have her contact but have never called her for any favor. How then can she sponsor a journalist she has never had dealings with?

In their numerous quests to find out how I get reports on the workings of Willie leadership, they pointed finger at Hon. Obunike Ohaegbu, the Public Complaints Commission (PCC), again a man I know but he will never allow anyone to smear the government of his state. When that failed, they have now employed a mere nomenclature masquerading as a group called the Initiative for Change Organisation to say I am being financed by the publisher of Elombah.com, Daniel Elombah.

It’s a public knowledge that Daniel and I are friends and colleagues in the media. The Daniel I know has never claimed to be a Journalist but a lawyer and publisher. Most of the stories published on the popular news site are reported by those he employed and if it happened that Willie is reported negatively on, why the hue and cry? If a media house chose to focus more attention on a particular State, they reserve such exclusive right. Sahara Reporters has never seen anything good in any government formed in Delta State, but the governors have not hired borrowed hands to fight them. Yes, most of my reports were once found in Elombah.com before I moved on to focus on Daily Voice NG as its Managing Editor while being the Editorial Board Chairman of www.secretsreporter.com, and since the group vowed to resist any reports against Willie, they should proceed to court ASAP.

Rather than chase shadows, Willie should be advised to focus on governance and not allow my shadow or Daniel to haunt him. Was it false news I reported on him appointing a Special Assistant on Fish Matters, which they earlier denied but later owned up to? Was it fake news that the he was having political tussle with his now estranged godfather, which I reported on Obi defecting to PDP weeks before he actually did?  If the faceless groups have been following the news, they would have been enlightened that the Nigerian Union of Journalist (NUJ) and the Radio, Television, Theatre, and Arts Workers Union (RATTAWU), of which I am Chapter Chairman does not stand by fake journalists, like they did in my case versus the corrupt Niger government. Their daftness must have made them not read on the news that the Niger State government dropped all the charges and that my reputable lawyers are considering options to seek redress for my abduction and illegal incarceration.

How will they when all they eat, drink and sleep is how to milk money from Willie by singing his praise? I put it to them that they do not love Wille more than I do, hence my reasons for not reporting on the misdeeds happening around him for some time now, even when I have such reports. I will rather allow him to concentrate on delivering the true dividends of democracy to the people that elected while, while I have a duty to visit the State to see if he is performing, just like my last visit proved that he has lived up to 40% expectation so far. My working visit to the State has been on personal basis without contacting government officials even when I ought to. Probably If I had done, the prostituting group would have flooded the media that I demanded for money from the State government.

Willie Obiano should immediately do away with such phantom mammals that will shield him from the truth and embrace blunt Journalists who will tell him the bitter apostolic truth without taking a dime for him. After all, it’s our constitutional duty to report the happenings in the land.

Initiative for Change Organisation if at all they are registered should hide their heads in shame for daring to challenge people who are merely doing their job. They should drive to the nearest transformer to hug themselves for putting their names in the hall of shame. They should drive to the nearest lagoon to die if they feel pained on my reports on Anambra and Willie. They should tell their paymaster that political governance is not boardroom politics which he played in Fidelity Bank, but a different field where all voices are welcome and if they feel they can silence me, they should be ready to fight with a multitude which I aptly represent.

Never will Anambra citizens be misgoverned or silenced into cowardice. The era where the crimes of leaders and their promised not kept is over and the earlier ICO realize it, the best for them. I do not just weep for them for their level of sycophancy but their generations for sowing this immoral seed. Time will tell.