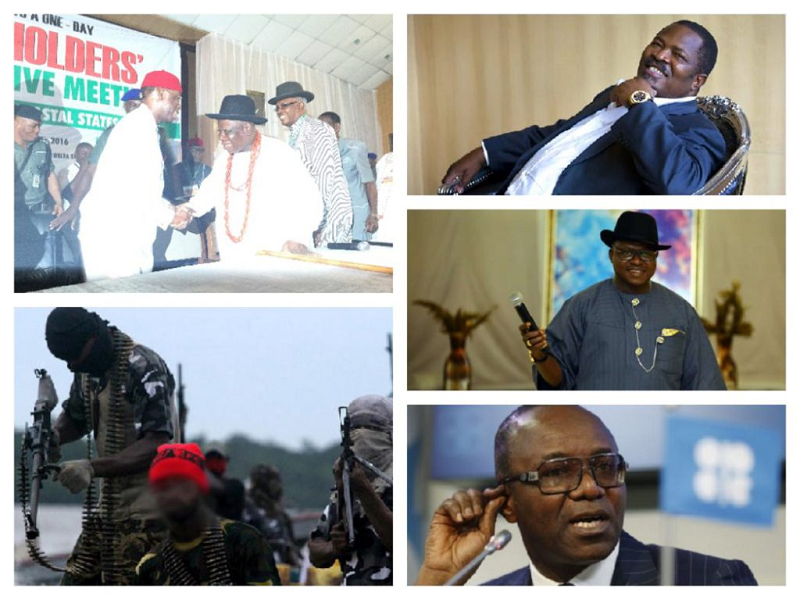 GOV OKOWA DUPED: CLARK, OBAIGBENA, ALAIBE AND KACHIKWU USE HIS HEAD TO COLLECT N1 BILLION FROM FG TO SECURE CEASEFIRE WITH AVENGERS

The current ceasefire by the Niger Delta Avengers (NDA) following intervention by some leaders is not without some financial benefits shrouded in secrecy, Secret Reporters has learnt.

In a hurriedly packaged Niger Delta Coastal Security summit held in Warri, Delta State, informed sources confided in this Newspaper that Edwin Clark, Timi Alaibe and controversial This Day Newspaper publisher, Nduka Obaigbena connived with the Minister of Petroleum (State), Ibe Kachikwu to collect a whooping sum of N1 billion with promise to secure ceasefire from the NDA.

To pull wools over the Federal Government eyes, they arranged the summit using Clark as a front, after secretly meeting the Avengers of their intentions. With the deal sealed with NDA and the need to secure the consent of any governor from the coastal area, Delta State Governor was conscripted just few days to the event by Clark.

Unknown to Okowa till this moment of going to press, N1 billion has been shared among the quartet and some NDA negotiators with his name only used to attract government presence, support and commitment, alleged the source. He only got to know of the security summit less than a week to the event, but accepted since it was “organised by Clark and has security as its theme”, the source stated.