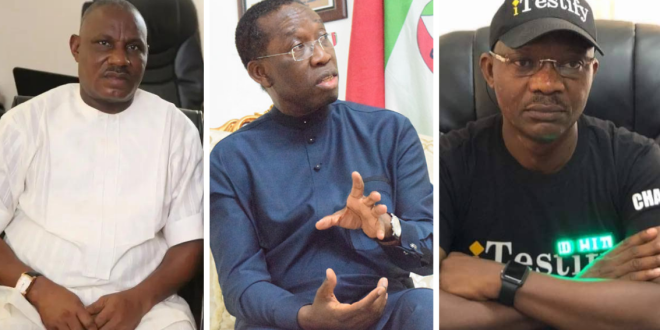 The eleven media aides to the Delta State Governor, Mr. Ifeanyi Authur Okowa will be entering the boxing ring on Monday with his Chief Press Secretary (CPS), Mr. Olise Ifejika over what they term “hoarding of Christmas package”, SecretReporters can authoritatively report.

Our sources within the government house revealed that over N25 million was released to the information desk of the Governor to share to the media aides and 50 man social media team, but this has not been fairly done, as those saddled with the money have stolen a huge part of it.

Okowa who has the highest number of media aides in the country is currently groaning over the sharing formula adopted by the Commissioner for Information, Charles Ehiedu Aniagwu who handled the editors of national news houses, and Olise who handled media aides and local cyber ‘copy and paste’ employees.

We gathered that the CPS gave Godspower Asighwu who is SSA media and also the Patani PDP local government Chairman the sum of N100,000 while another SSA, Nelson Egware was given N50,000. The Executive Assistant to the Governor on Communications, Mr. Fred Latimore was also given N50,000, an act which has led to his rebellion in the past few days.

Other media aides were given N20,000 through the government house PRO. All the cash was accompanied with two small bags of rice. The 50-man social media team were given N5000 each with one small bag of rice to take home.

“I’ve told others that by Wednesday we will reject the money from the PRO who the CPS gave directive to give us”, said one of the aides who pleaded anonymity.

2019 to date has been the worst media year for the appointees and journalists since Okowa was first elected in 2015, as the former Commissioner for Information, Mr. Patrick Ukah who is now the Secretary to the State Government is noted to have treated the fourth estate of the realm better.