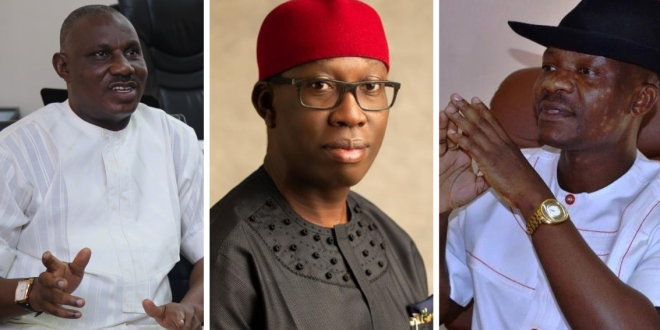 The over 11 media aides of Governor Ifeanyi Authur Okowa will be receiving alert on Wednesday from the office of the Chief Press Secretary, Mr. Olise Ifejika.

This quick release of funds is coming on the heel of SecretReporters expose on how he diverted the millions meant to be shared to the Governor’s media aides and team. He had earlier given them a little fraction of what was actually budgeted for them.

Our informants in the media wing of the Governor lamented how the CPS has neglected and divided journalists in the state.

“The CPS is the worse we ever have in Government House. He and Aniagwu are using divide and rule on NUJ. They are using Asaba Correspondents Chapel Chairman, Dominic Adewole to scatter NUJ because Ikeogwu refused to be bullied by them”, one of the senior reporters confided in us.

Collaborating the claim of the senior journalist, another reporter noted that “they keep giving Dominic Adewole money to bribe his Chapel to be fighting NUJ. The Information Chapels and other Government Media houses Chapels are suffering and smiling under Aniagwu and CPS Ifejika Olisa. Imagine giving the Federal Information Chapel 4 small re-bags of less than 25kg of rice which is less than two bags of rice to a Chapel of about 40 people. The State Ministry of Information Chapel of over 200 journalists got just 10 of the small bags which is less than 5 normal bags of rice”

SecretReporters investigation uncovered the Field/LGA Information Chapels of having no journalist.

According to our independent findings, the Chapel used in dividing NUJ is owned by one of the SSA to the Governor, Kingsley Azuh. He runs Truth Chapel that has no publication. All members of the Truth Chapel are industrial trainees from Ogwashi-Ukwu Polytechnic. In the Truth invisible publication, Kingsley Azuh daughter (Miracle Azuh) who is currently doing her NYSC in Government House, Asaba is a Director.

Previous Unholy Thief: Gov. Okowa’s Media Aides In Fight To Finish Over Christmas Money As CPS Bolt With Millions
Next Super Illiterate: Delta Ministry of Lands Shortchanged Self In 2022 Budget Due to Dull Brain Commissioner