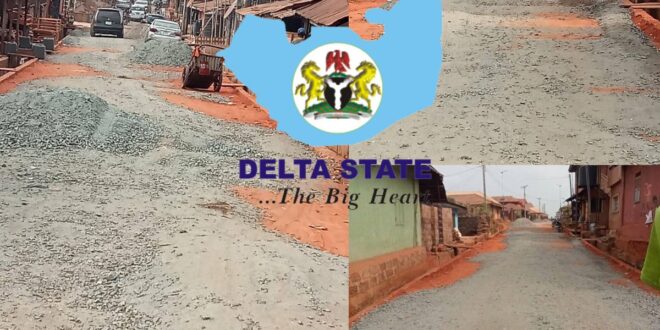 It is clear from the ongoing shoddy construction of Iduwe Street road in Boji-Boji Agbor, Ika South Local Government Area, Delta State, by Neodede Contracting Limited, that Ifeanyi Okowa’s administration and his family have no respect for the wellbeing of Deltans.

Following an alarm raised by the residents of the area on the shoddy construction job being carried out on the road used by thousands of people daily, SecretsReporters gathered that the contract was awarded to Neodede Contracting Limited, a company owned by Vernon Justice Ebegboni, the governor’s nephew, for a huge of ₦190,000,000.00.

Neodede Contracting Limited with Registration Number 1512523, was registered on 20th July 2018 and its registered office address is 5, Abakaliki Close DSc Complex, Warri. It is not clear if the company actually exists with physical staff and activities at the said address.

The company which is allegedly being used by the governor’s Senior Special Assistant on Domestic Matters, Victor Ebegboni, is said to be responsible for the poor construction of Iduwe Street, Hill Street, back of Road Safety, and Egwulemu Street, Iyogo road, all in Ika LGA.

The contract for the Iduwe Street construction which the governor’s nephew has deployed wheelbarrows in shabby sand-filling not minding the implication on the road users was awarded on 9th July 2021. The contract was documented to end on 9th July 2022.

Screenshots of the contract details below:

Even though it is not clear if the company actually exists with physical staff and activities at the given office address, the Ministry of Works awarded it the contract using “rated criteria” and selective procurement method.

The awarding of the contract to the Governor’s nephew and aide is an infringement of Delta State Public Procurement Law, 2020. According to PART V section (22) of the law, Subject to any exemption allowed by this Law, all public procurement shall be conducted:

(d) In a manner which is transparent, timely and equitable for ensuring accountability and conformity with this Law and Guidelines deriving therefrom;

(6) (e) have fulfilled all its obligations to pay taxes, pensions and social security contribution;

(8) (a) there is verifiable evidence that any supplier, contractor or consultant has given or promised a gift of money or any tangible items or has promised, offered or given employment or any other benefit, item or a service that can be qualified in monetary terms to a current or former employee of a procuring entity or the Commission, in an attempt to influence any action, or decision making of any procurement activity.

The investigation by SecretsReporters showed that Neodede Contracting Limited indulges in non-payment of tax which is a critical offense against the federal and state governments, making the company in eligible for a contract.

Ika South is a Local Government Area of Delta State with its headquarters located in the town of Agbor. The LGA is part of the greater Igbo-speaking Anioma community of the state. At the 2006 census, it has an area of 436 km² and a population of 162,594.