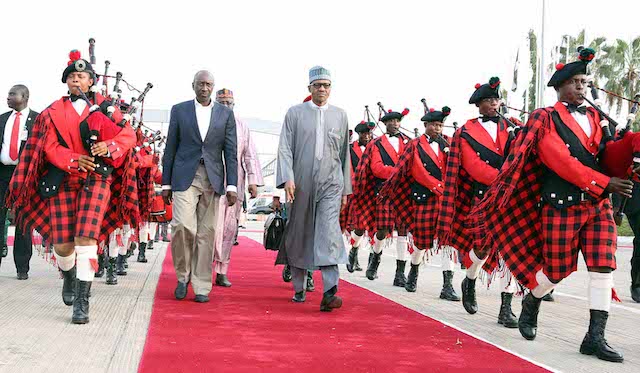 President Muhammadu Buhari has spent about N5.2 billion on foreign trips since he assumed office 11 months ago, a report this morning said. The Nigerian leader, who is presently on a state visit to China, has made a total of 26 of such trips since May 29, 2015 when he took the oath of office and by the time he would return, he would have spent 50 days outside Nigeria.

A report this morning by Nigerian Pilot quoted “impeccable sources within the Federal Ministry of Finance” as disclosing that each of the state visits cost Nigeria a minimum of N200 million, bringing it to a total of about N5.2 billion of tax payers’ money. “The amount excludes what state governors and ministers who are always part of the president’s entourage draw from their respective state governments’ and ministries’ accounts in the name of estacode and other allowances,” the report said. Nigerian Pilot said its investigations showed that the amount spent on each foreign trip by the Presidency is deduced from official basic travel budget for civil servants and politicians, which peg foreign travel amount for the President of Nigeria at N200 million per trip irrespective of the destination.

“Similarly, the Vice President and the Senate President have N120m and N80m respectively attached to their offices for such trips also,” the report said. It quoted a source as disclosing that the amounts cover the total expenditure for each trip “which, in the case of the President, include cost of fueling his official aircraft, all flight charges outside the country, security, accommodation and feeding as well as travel allowances for the president and his entourage.”

According to the report, “President Buhari’s first official trip after he became President of the country started with a one day trip to Niger on June 3, 2015, where he held talks with President Mahamadou Issoufou on security issues affecting the sub-region including how to curb the activities of Boko Haram.

On June 4, Buhari headed for Chad to hold talks with his Chadian counterpart, Idris Deby, as Nigeria and neighbouring countries discussed ways of finding lasting solutions to the lingering Boko Haram insurgency. Two days after his trip from Niger and Chad, the president left Abuja for Germany to attend the G-7 meeting, accompanied by a 20-man delegation including former Governor Babatunde Fashola of Lagos State, former Chief of Army Staff, Lieutenant-Gene ral Abdulrahman Dambazau (ret.), his personal photographer, Bayo Omoboriowo, and his cook.

He went to South Africa on June 15, to attend the African Union (AU) summit and on July 19, President Buhari left Abuja for the USA with a 33-man delegation on the invitation of President Barrack Obama of the United States. “He visited the US again in September for the UN General Assembly with a 22-man delegation after celebrating the Eid in his home town in Daura. “On August 1, President Buhari paid a one-day visit to Benin Republic with a sole agenda of discussing ways of extending the fight against Boko Haram insurgency. On September 7, Buhari was in Ghana after which he left for France on September 14, on a three-day official visit following an invitation from his French counterpart Francois Hollande. On October 27, he left Abuja for New Delhi, India, to take part in the 3rd Summit of the India-Africa Forum. On November 22, he was in Tehran, Iran, to participate in the Gas Exporting Countries Forum (GECF) summit.

He has since also visited Dubai in United Arab Emirate, Saudi Arabia, Qatar, United states for the Nuclear summit and now China. “Cumulatively, Buhari has been out of the country for 50 days in which he spent 1,200 man hours on such trips.“

Although the explanation for the trips are majorly to attract investors, seek help in repatriating alleged stolen money stashed in foreign countries and to seek help to fight terrorism, Buhari watchers however state that no immediate visible sign of accomplishing any of the agenda for the trips has manifested since May 29, 2015.”