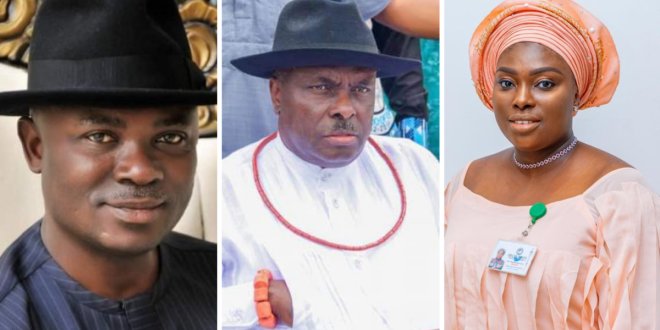 Member representing Ethiope Federal Constituency in the National Assembly, Mr. Ben Igbakpa is currently running from pillar to post over a marching order given by the recognized political leader of Delta State, James Ibori, SecretReporters can authoritatively report.

Sources within the former governor’s political camp revealed to this medium on how Ibori summoned the reps member to his country home in Oghara, where they both hail from, and directed him to begin to wound down his tenure as the 2023 elections approaches.

In the course of the meeting, Ibori told the legislator that his daughter, Erhitake who is currently a two terms Delta State House of Assembly member will take over from him.

The meeting had Emmanuel Uduaghan who is the immediate past governor and also Igbakpa political godfather present. In the meeting, Uduaghan rejected the order by Ibori asking “what for? Why should Ben be leaving office in 2023 when he was just elected in 2015, which is only one term?” Igbakpa was Uduaghan’s powerful Commissioner for Transport and his arrow during the 2014 election.

Igbakpa we gathered appealed to Ibori to allow him go back again for another term as denying him the ticket for such will amount to oppression. “You are the godfather, the supreme leader, the one who for years I have served and been loyal to. Please allow me to contest again and thereafter you can have your way. If you deny me this, it will be oppression to a man like me who is from a poor home and has no one to speak for him”, the lawmaker is said to have said during the meeting.

His plea however fell on deaf ear as Ibori insist that he starts packing his properties from the National Assembly in preparation for his daughter. A source who confided in us noted that Igbakpa has been disturbed since the incidence, wondering why Ibori is insisting on his daughter.

Ibori’s daughter from our findings is the Chairman of the juiciest committee being appropriation but rarely comes for sitting. She is always in Lagos with the husband known for having tattoos all over his body and doing nothing, but waiting on his wife to bring the money from Delta State to feed his expensive lifestyle.

The State Governor, Dr Ifeanyi Okowa we gathered has been aware of the plan by Ibori to send his daughter to the House of Reps since 2021 but has kept quiet. We gathered that he will not be interfering with Ibori’s decision but allow the delegates to decide, while he allows for a free and fair process.

Erhitake was Okowa’s personal assistant when he was a Senator and share a father and daughter relationship while Ibori was away in a London prison.

Previous Bandit Empowerment: National Agency for Green Wall to Purchase N50 Million Worth of Motorcycles for Community in Jigawa State
Next Fowl and Toothpick: Amaechi’s Ministry Of Transport To Lavish N48 Million On Unspecified Sports Equipment