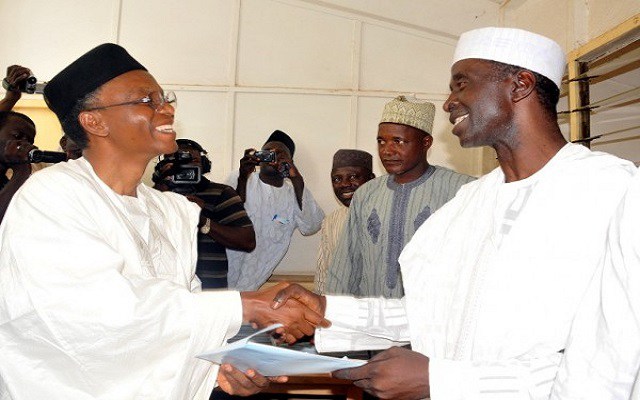 COLD WAR: EL RUFAI AND DEPUTY, BANTEX LANDS EACH OTHER DIRTY SLAP WITH EL RUFAI BEATEN BY HIM BLUE BLACK

The Whistle has been monitoring reports that the Governor of Kaduna state Mallam Nasir el-Rufai and his deputy, Architect Barnabas Bala Bantex had traded slaps during an argument at a cabinet meeting in the state.

According to a reliable source via a telephone conversation, the Governor and the deputy have been having a cold war over the plans by the governor to sack top civil servants in the state.

The governor who is embarking on a civil service reform agenda had decided to retire these top civil servants, who still had some years left in service but the deputy was said to have been disturbed and deeply uncomfortable with the situation.

The deputy governor had confided in his close associates that the list of top top civil servants marked for this retirement exercise reflected a majority of up to 70 per cent from the Southern Kaduna extraction.

During the cabinet meeting, the deputy governor bared his mind and told governor El-rufai he is not in support of the exercise, he said that he cannot control the backlash that will arrive as a result of that action. Arc. Bantex was quoted as saying “I cannot go home, they will stone me”

The governor had insisted that the decision was without prejudice and in the best interest of the state but the deputy insists that on equality as his constituency already feels marginalized.

At this point the conversation became heated between the Governor and his Deputy and words were traded between both leading to Governor Elrufai landing a slap on the face of his deputy.

The deputy governor was said to have immediately taken his seat and told the governor that since having arguments and counter views has earned him a slap, he thinks the right thing to do was to let everyone know and resign. Governor El-rufai was said ti have retorted that Bantex cannot resign and continued the meeting.

The security details who were not present at the meeting rushed in and restored calm.

The cabinet members also intervened and attempted to broker peace between both. According to one of them, Elrufai apologized and pleaded that the matter should not to be discussed outside the cabinet.

The SA Media and Publicity to Governor el-Rufai, Samuel Aruwan is unreachable.