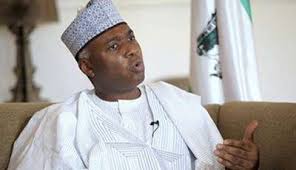 Those who understand the nitty-gritty of politics will acquiesce with me that Bukola Saraki is fighting a battle of other criminals.
It all started when PDP senators discovered that there was a disagreement in APC regarding the nomination of the Senate president, PDP Senators who were very scared of been prosecuted and intimidated by APC, seized the opportunity to throw their support behind Bukola Saraki who at all cost wanted to climb the seat.

PDP had every chance and opportunity to vote for One of their own as the Senate president but decided to use Senator Bukola Saraki as CAT’S-PAW, despite that, unprecedented still happened as a PDP senator emerged as his deputy. Do you think it just happened?.
To my very best understanding of the game, PDP and APC are fighting a proxy war using Senator Bukola Saraki.

Taking note of the Senators that are solidly behind Saraki, you will discover that most of them are either PDP senators who were one way or the other serving under the last administration and soiled their hands in lots of dirty runs or some APC senators who are using him to forward their ambition and shield themselves.

Aside kwara State PDP members, almost all the PDP members across the country are solidly behind Senator Bukola Saraki, including Ayo Fayose of Ekiti State the arch enemy of President Buhari.

I don’t want to talk about the CCT case yet, not because I don’t want to contribute but i believe a lot of people are doing that already but Bukola Saraki should stop dancing to the drum of destruction beating by his PDP supporters and his unguided followers.
Bukola Saraki fail to realize how much he will be affected politically even if he eventually win the case.

As it stands, Senator Bukola Saraki belongs to no political party. He stands in between and not trusted by both.
The earlier senator Saraki realizes the truth and correct his mistakes the better for him. Don’t get me wrong on this, I don’t ask him to resign his position but to swallow his pride and do the necessary.
This is my candid advice to stop all these shameful dramas.

It’s shameful and disappointing the way the witnesses are forming Baba Wande, in the movie called “Ti Oluwa ni oni Ile”, all these are stunt.

Its saddening seeing what our youths have reduced them to, defending and fabricating lies to suit their own side of the story, I was at the CCT court twice, I have to cover my eyes In shame for some happenings from the side of our judiciary and politicians. This drama must come to an end.

Let us all support the government of President Muhammadu Buhari In moving the nation’s forward, I believe with time all thieves, criminals and looters will face the wrath of God.

Previous LIKE MASTER LIKE SERVANT: DULL HEADED MEDIA ASSISTANT EMPLOYED BY AMOS ITIHWE WHO HAS NOT FINISHED SEC.SCH, WRITES GARBAGE TO SECRET REPORTERS
Next AMENDMENT OF THE CODE OF CONDUCT AND TRIBUNAL ACT: ANIOMA NATION DISOWNS SENATOR PETER NWAOBOSHI.