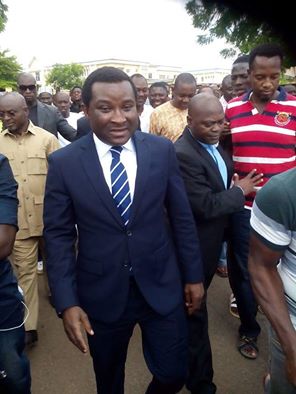 YOU ARE A SMALL BOY; YOU NEED 100MILLION FOR ELECTIONS NOT 550MILLION NAIRA: WHAT SUSWAM TOLD BENUE PDP GUBER CANDIDATE ON DASUKI LOOT

More facts are emerging by the day as the expose on the loot by former National Security Adviser, Sambo Dasuki ropes in more persons.

Secrets Reporters gathered that Dr.Iyorchia Ayu is not the only Benue State indigene who might have benefited from the fraudulent loot, but sources say, the Peoples Democratic Party(PDP) candidate also shared from the loot.

Prince Terhemen Tarzoor is said to have received a total of five hundred and ffifty million naira only (N550 million) as well as other PDP gubernatorial candidates for their campaign.

Barring any invitation by the Economic and Financial Crimes Commission(EFCC), our source quoted Prince Terhemen Tarzoor as saying that the money came through Suswam and that the former Governor gave him one hundred million naira only(N100million) saying “you are a small boy and don’t need to spend much money.”

From all indications, the former governor of Benue State, Mr.Gabriel Suswam pocketed four hundred and fifty million naira(450 million) from the loot.
Sources at the EFCC office said an invitation will be extended to Suswam to appear at the Commission’s office and subsequent prosecution.