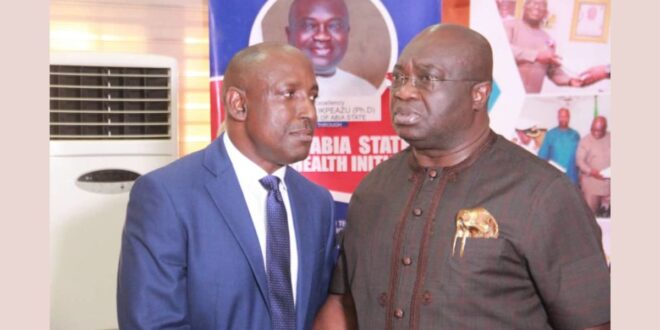 Documents assessed by Secret Reporters have revealed how Abia governor, Okezie Ikpeazu’s led administration awarded contracts, to a company whose secretary is, Christopher Ezem, the Secretary to Abia State government, thereby violating the Public Procurement Law and the Code of Conduct Bureau.

Perusing the Abia State E-procurement portal, Secret Reporters found out that, the state Ministry of health on the 30th September 2021 awarded the contract for the purchase of surgical beds for Isolation Centers in Aba & Umuahia to Zamkel Resources Nigeria Limited. Further findings revealed that the Company’s Secretary and Deponent, is Christopher Ezem who happens to be the Secretary to Abia State government, the contract was worth the sum of N5, 000,000.

More so, Christopher Ezem, the Secretary to Abia state government, by his position, as the Secretary and Deponent of Zamkel Resources Nigeria Limited, grossly violated the Code of Conduct Bureau, which states; that except where he is not employed on a full‐time basis, engage or participate in the management or running of any private business, profession or trade; but nothing in this paragraph shall prevent a public officer from engaging in farming or participating in the management or running of any farm.

The company ZAMKEL RESOURCES NIG LIMITED was registered with CAC on August 28th 2017 and is currently inactive.

In a similar manner, the same Abia government through the Ministry of Health on the 30th of September 2021 awarded the contract for the Renovation of the Central Medical Store, to Vic-Nee JD Limited whose director is Fabian Nwankwo, the People’s Democratic Party (PDP) Publicity Secretary in Abia state, a party the governor belongs. The contract is worth N17, 000,000. A check on CAC also revealed that the company is not active.