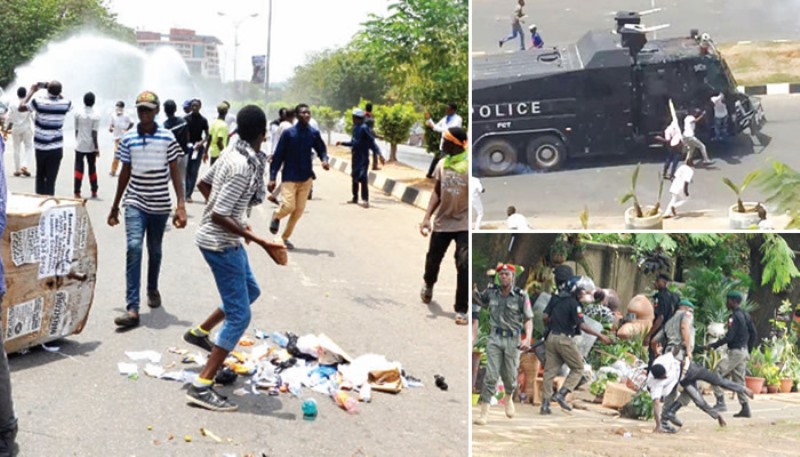 TRY AND SEE: WE WILL SHOOT YOU TO DEATH IF YOU PROTEST HENCEFORTH POLICE WARNS NIGERIANS

In a democratic state as Nigeria, it is the unalienable right of citizens to conduct peaceful protests, processions, rallies or demonstrations so long as it is within the ambits of the law. It is a right embedded and guaranteed by the 1999 Constitution and any law that attempts to curtail such right is termed null and void and as such has no consequence.

A recent update by the PRO of the Nigerian Police reveals that the force has thrown caution to the wind, by taking a stance publicly to infringe on the rights of Nigerian citizens who have been victimized overtime by the authority and thus the need to air their plights. This is evident in an Instagram update by the PRO as she uploaded a picture of herself and her colleagues captioned: “if you a throw stone expect a bullet! Squad on mission! #Bosslady #protectiveservice. If you feel like joining the squad say HI!

This appears to be a show of little or no regard for the rule of law or simply an intoxication by the license to carry firearms, as the Police have in the past shown no restraint in issuing and executing such threats to would be protesters. The hashtag #protectiveservice also goes to show the irony implored by the vicious cop as it totally contradicts her earlier statement of an eye for a bigger eye.

It is widely believed that the Police assistant PRO in Lagos State Command, Dolapo Badmus made the post with impunity on her Instagram handle probably due to the recent killings of Shiite protesters in Abuja who were agitating for the release of their spiritual leader Malam Ibrahim El-Zakzaky. According to Amnesty International last week, 45 protesters were confirmed killed after they threw stones at security agents who had come to disperse their protest with the killings, a violation of human rights till date left uninvestigated and unchecked.