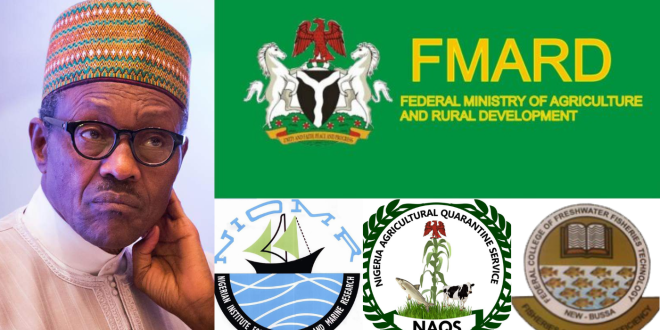 While Nigerians groan over the passage of the 2022 budget of N17.126 trillion by the ninth Senate against the N16.391 trillion presented by President Muhammadu Buhari, frivolous projects in the budget perceived as looting strategy used by MDAs are beginning to surface.

One of such projects repeatedly seen in the 2022 appropriations bill is the Construction of an Ultra-Modern Aquatic Market with Solar Street Light and Landscaping in ETSU Musa Market, Zone 1 and 2, Bida, Niger State.

SecretReporters learned that in the 2021 FG budget approved in December last year for the Federal Ministry of Agriculture and Rural Development, three agencies; The Federal College of Fresh Water Fisheries Technology -New Bussa, Nigerian Agricultural Quarantine Service and Nigerian Institute of Oceanography and Marine Research requested and got an approval of 400 million Naira each totaling 1.2 billion Naira to construct this same market even though such project was outside their respective mandate.

Out of the three agencies, the Nigerian Institute of Oceanography and Marine Research in its 2022 budget again requested for N250,000,000 each for the Construction of Zone 1 and 2 of the market with code ERGP5180182 and ERGP5180183. The projects which were initially tagged as “new” but later changed to “ongoing” saw N237,500,000 approved respectively for the agency by the national assembly.

Though the status of the project is unknown, it was further revealed that two companies, Kilash Oil Nigerian Limited, registered as a petroleum products sales & distribution company with RC-1122077, and RRK Inspire Services LTD with RC-786829, were contracted by the agency to execute the project and received at least 102.9 million Naira in June 2021 and 134 million Naira in July 2021, more than 59.22% of the 400 million Naira.

With the project in Bida now termed a gold mine, the MDAs approved 2022 budget details obtained from the Budget Office of the Federation further showed that the Federal Ministry of Agriculture and Rural Development headquarters Abuja, not wanting to be left out of the looting spree also got approval to execute the same projects at the Etsu Musa Market with code ERGP5180154 and ERGP5180155 for zone 1 and 2 while N225,000,000 was approved respectively in the 2022 appropriations bill passed by the ninth assembly.