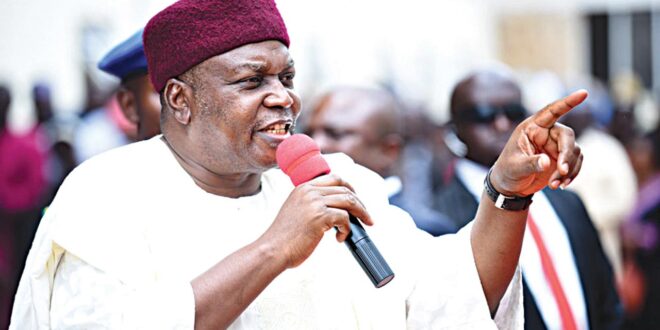 Mambilla Beverages and Company Limited, located in the Kakara area of Mambilla Plateau in Sardauna Local Council, was dormant until Governor Ishaku revitalized it during his first term in office. However, the producer of one of the best teas in Africa, with markets both within and outside the state, is being put up for sale just six months before the governor’s eight-year in office expires.

According to the memo obtained by SecretReporters, the state executive council meeting on August 31, 2022, concluded that “In order to expand the Mambilla Beverages Nigeria Limited by relinquishing part of the Taraba State Government Shares which could be used to employ additional factors of production such as land expansion in Tea plantation, injection of additional Capital by the new Investors to maximize production in the area of factories expansion, better management by the new Investors.

“Consequently, increase in revenue generation and profit maximization. Which shall be used to expand and or revive other Moribund Companies of the State,

“Council Approved that the Mambilla Beverages Nigeria Limited should commence the Process of privatization of the Company by 75% to prospecting Shareholders and he supervised by Taraba Investment and Property Limited while 25% be retained by the State Government.

“Council equally directed that all Processes of privatization like advertisement, valuation of the existing assets and liabilities of the Company must be strictly followed in line with Corporate Affairs Commission (CAC), the Company’s and Allied Matters Law and the State BPP, thereafter to represent another memo for Council’s final consideration and Approval of the Privatization.

“Council also directed the Special Adviser on Legal and Legislative Matters to forward Council’s Resolution to the State House of Assembly for consideration and Approval.”

In another letter dated 1st September, 2022, from the Office of the Executive Governor, Executive Council Secretariat, Government House, Jalingo, the Managing Director Taraba State Investment & Properties, Ezekiel Iliya, was urged to take the necessary steps to prepare for the concession.

The letter signed by EXCO Secretary ABDUL-KADIR H. ABUBAKAR reads in part: “The following extract from the conclusions 5TH (2022) Meeting of the Taraba State Executive Council dated: is being forwarded to you for necessary action.

1. The acknowledgement slip below should be completed in full and returned, please. 2. Copies of this extract have also been forwarded to:

Speaking to reporters in Jalingo on Wednesday, Mr. Iliya explained that the government will privatize more state companies in order to build new ones, and that the agency’s function was to build government corporations and then transfer them to private investors once they were fully developed.

He stated, “We are not selling the company entirely but to transfer ownership structure from the government to private individuals. We are selling 75 per cent of its shares, and 25 per cent will be owned by the government.”

According to the report, the workers and host communities claimed in the petition that the Governor plans to sell the Tea Factory, which they claim is worth over four billion Naira, for N300 million, while criticizing the entire privatization plan.

Previous Contract Fraudster: Governor Okowa swindles Deltans, awards contracts worth over N100M to unregistered companies in violation of Public Procurement Act
Next Years After, Masterminds of Over N17 Billions Looted By Snakes, Monkeys, Gorillas, Others, Yet To Know Fate