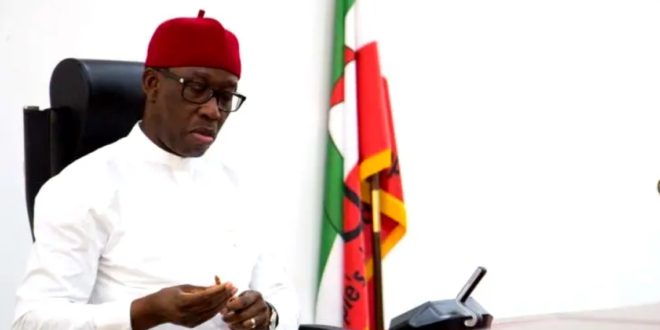 Delta 2023: It’s Between Development And Malice

To put it bluntly, the angling in Delta State PDP for the 2023 Governorship flag bearer is a contention between the need for the development of the state and the need for vengeance.

Long before now, Deltans had taken it for granted that the Governorship position would go to Delta Central as Delta North completes the first cycle of rotation by Senatorial Zones.

But, Governor Ifeanyi Okowa introduced another element: That there was no written agreement on rotation and would therefore not respect the presumed sequence.

While he pretends to the Delta public to base his position on fairness and equity, those who know understand that he is on a mission of vengeance.

What for? He is angry that the Urhobos of Delta Central presented candidates in the 2014 primaries when it was supposed to be the turn of Delta North and even though Delta North got it still and he eventually became the Governor, he wants to punish the Urhobos by denying them their turn, as a matter of retaliation.

His disposition brought the Ijaws into the race, with the argument that, as a major ethnic group, they cannot wait for the second cycle of rotation to get to Delta South before taking a turn. So, enter Barrister Kingsley Otuaro, the Deputy Governor; Senator James Manager and Braduce Angozi, a former Commissioner under James Ibori.

This development induced the debate on the suitability and sustainability of rotation by districts zones versus rotation by ethnic nationalities.

The Urhobos have tried hard to push back through the diplomatic lobby of DC-23 and, interestingly, Okowa encouraged them, even unto the pruning of aspirants, but perhaps, in the hope that they will hit brick walls with other ethnic groups.

The DC-23 lobby has however secured a good level of understanding across the various groups of the state. The Isoko and Itsekiri seem to be more comfortable with the zonal rotation. So too, majority of the top leadership of Anioma nation have disagreed with Okowa’s proposition to dismantle the sequence, insisting that rotation by districts guarantees better order, peace and harmony across the state.

Governor Okowa is angered by the dissenting voices in Anioma, so much that, using the influence of the Obi of Owa whom he made Chairman of the Delta Council of Traditional Rulers, he sought to split the Anioma Congress, which produced him, with the creation of another Anioma Progressive Union.

Notwithstanding, the DC-23 lobby has put Delta Central back in front for the rotation and Olorogun David Edevbie and Rt Hon Sheriff Oborevwori are the most prominent in the field which also has Chief Kenneth Gbagi and, possibly others whose intentions in the race are shrouded.

While Ibori and the most senior PDP leaders and elders of Urhobo, to the approval of their counterparts across the state, have proposed Edevbie as their choice aspirant, based on his credentials, experience and track record, having served in two administrations of the state and as Principal Secretary to a President, Okowa seems still to be objecting.

Governor Okowa himself, the entire top leadership of the state PDP, community party chieftains, the PDP delegates and, indeed, all Deltans, know well that in terms of qualification, development finance skills, administrative competence, management experience and exposure, Oborevwori does not stand anywhere near Edevbie.

For a state that truly desires increased pace of well articulated development, the choice between the two is a no brainer, but Okowa wants to take a pound of flesh from Edevbie for competing so hard against him in the 2014 primaries and putting so much pressure on him that it is presumed that he had to take a huge loan to keep in the race in which he however eventually finished tops and became the Governor.

Several eminent Deltans have appealed to him to jettison the idea of punishing the Urhobo nation for having their sons participating in the 2014 primaries. They point out that, first, the leadership of the PDP took charge to ensure that the rotation to Delta North was achieved and to ensure that the sequence is maintained.

Various Anioma leaders have also insisted that they would not lead their people into political enmity with the Urhobos so as not to create unnecessary ethnic disharmony, especially so as Delta North has got their due. They pointed out to him that he also garnered votes from Urhobo delegates, notwithstanding the participation of aspirants from Delta Central .

He was also reminded that, if nothing else, he should see that Chief James Ibori backed the rotation to Delta North and also overwhelmingly supported him at the 2014 primaries.

These were expected to sway Okowa to make a reconsideration but, there is a but.…….

To make it seem as if he has agreed for rotation to Delta Central, he is said to have settled for Oborevwori, the current Speaker. In doing so, he is tactically playing on the perception that the Okpes, though part of Delta Central, sometimes, do not see themselves as Urhobos. That helps him to fulfill his vengeance against both those he sees to be the Urhobos and particularly against Edevbie.

Ibori is said to have pleaded with him not to allow the spirit of vengeance to rule the party, stressing that the choice of a Governor for the state should be more in the overall interest of the State and based on the capacity to perform.

Ibori was said to have pointed out also that, while as Governor, he too was offended by several persons but he did let go as a leader in the interest of the peace and harmony of the state.

He reportedly recalled when, as a sitting Governor, Chief Godswill Obielum from Delta North challenged him in the 2003 primaries and how he did not count that against Anioma people but ensured that they got their dues in development and appointments, including Okowa himself who was super commissioner under him and grew to become Secretary to the State Government under Dr Emmanuel Uduaghan, all of which helped him grow politically till he became Governor.

He reminded Okowa that notwithstanding the challengers in the 2014 primaries, he eventually has become the Governor and that it is not right for him to be nursing grudges for the whole of the eight years.

Several PDP elders have also pointed out to Okowa that he should not hold grievance exclusively against Edevbie, being that others like Kenneth Gbagi from Delta Central and aspirants from Delta South also entered the race in 2014.

They also reminded him that after the 2014 primaries Edevbie immediately joined him to campaign for his victory in the 2015 elections for which he himself testified at a rally in Akwukwu-Igbo that Edevbie supported him in several ways and asked the people to thank him.

Recently, and in uncommon humility, the Urhobo Progress Union which has endorsed Edevbie much the way that the Anioma Congress endorsed Okowa in 2014, also appealed to Okowa, on behalf of Edevbie, to forgive any perceived infraction he might be feeling.

All these have, however, not swayed Okowa. He seems to be bent on vengeance against the Urhobos and Edevbie and does not care about the quality of who succeeds him.

Reacting on the development but pleading anonymity, a top member of Anioma Congress said he is worried about the spirit that is leading him in this matter.

“The Governor’s attitude is a bit strange to us as Anioma people. Delta North has got the Governorship when due to us. He was the beneficiary and became the Governor as he sought. He has done first term and he is about to finish second term. What else does he want? We always thought he is a true Christian. I cannot believe that he can hold a grudge against someone or a group of people for seven, going to eight years. The Bible says we should not let our anger see the setting of the sun, that we should forgive seventy times seven times, that if we have a grudge against our brother, we should first go and make peace before we approach the altar. So, how has he been praying and calling God all these years? How can we sacrifice having the most competent person for the development of our state just to feed somebody’s urge for vengeance? I pray God intervenes because such spirit should not rule us.”

However, a close source in the Delta PDP Executive Committee and also in Government House has explained that Okowa’s target goes beyond Edevbie.

“Okowa knows that Edevbie is the best but his motive is deeper than we can see. Yes, it is true he wants to hurt the Urhobos but he is only using those arguments of anger as a smokescreen. His real motive is to dislodge James Ibori as the father of the PDP in Delta, render him irrelevant in the politics of the state and at the national level so that he becomes the ultimate godfather. It is his style. Recall that he confessed that Rt Hon Monday Igbuya helped him so much to win the 2014 primaries, how did he reward Igbuya? He removed him as Speaker of the State House of Assembly.

Senator Peter Nwaoboshi, as the state PDP Chairman and a leading figure in Anioma, went to London to get Ibori to confirm his support for rotation to Delta North which now benefitted Okowa. He has been driven out of the party. Imagine Delta boasting to be a PDP state but having two APC senators and one PDP Senator, yet Okowa wants us all to be comfortable so long as there is nobody to ask him questions. I don’t want to talk about Hon Friday Osanebi whom he practically also drove from the party. He has empowered a new brigade of subservient people. This is why you see the likes of Ejele (Michael Diden) Askia and Nani jumping up and down and sponsoring people to insult Ibori. As far as Okowa is concerned, Ibori should go to hell so that he can be the only man standing.”

These are truly the underlying issues in the PDP on the determination of the next Governor of Delta State.

It’s simply between those who want light by insisting on having the most competent hand to deliver on the development of the state and those who consider vendetta and ego more important that the progress of the state.