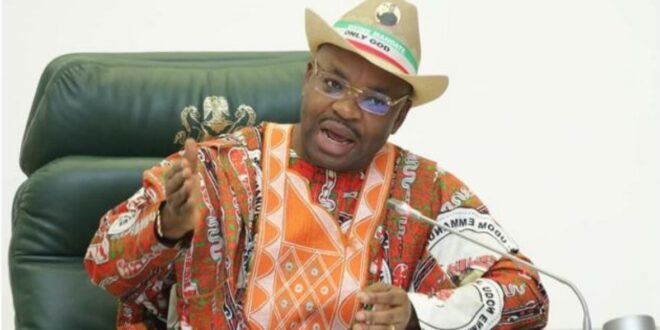 The 2022 presidential race is heating up and taking shape. More Nigerians are joining the race on a daily basis. As is the norm with political electioneering, there are usually contenders and pretenders. Across the two leading political, the All Progressive Congress (APC) and the Peoples Democratic Party (PDP), 30 Nigerians have so far indicated intentions to run for the office of the president with a good number of them going a step further to pick nomination forms.

The main opposition party, PDP has 15 candidates in the race to emerge as flag bearers of the party. One of them is the executive governor of Akwa Ibom State, Mr Udom Emmanuel. A gentleman to a large extent, but since his foray into politics about 10 years ago, Udom Emmanuel has learnt the tricks of propaganda and deception.

By all means, Mr Emmanuel has the capacity to rule Nigeria, and I must add, even better than the present helmsman. However, that is not what makes a Nigerian president. Asides from ones political standing in the country and network, the rest answers to cash and how much of it one is ready to dole out.

Now, that is the problem, because Udom Emmanuel is a ‘poor’ man compared to Bola Tinubu and Atiku Abubakar. And since Nigeria operates a money politics, Mr Emmanuel stands no chance. He has started consultations. He has met National Assembly members and has consulted the two towering generals in Minna – IBB and Gen Abdulsalam Abubakar. He is going to literarily tour the country to consult with strategic stakeholders. Those conversant with the intricacies of Nigerian politics know that heavy greenbacks exchange hands during consultations. The logistics for moving from one part of the country to another is huge and capital intensive.

Mr Emmanuel did declare his assets before contesting the 2015 elections and I can bet he was a millionaire in Naira. I will be surprised if he had up to 250 million Naira in liquid cash. A Governor earns 11,540,896 million Naira annually. This amounts to 92 million Naira in 8 years. I will like to put it to Mr. Governor, who will/is bankrolling your presidential ambition? Yes, we know that sponsors of Brekete Family Radio purchased your nomination form. But having stood for election twice, I guess you have an idea of the financial implications of running for an executive office. Who will bear such cost?

Definitely, all of your worth, legal and illegal cannot fund a presidential campaign in Nigeria. You sure do not have a bullion van in your home, neither can you match the bullion vans that will come out of Bourdillon. Or are you claiming ignorance of the money politics that your ilk have instituted in Nigeria? The weaponisation of poverty?

This article is about the source of money Udom Emmanuel intends to spend on his presidential wild goose chase. Obviously, the deacon did not consult Luke 14:28 which says “for which of you, desiring to build a tower, does not first sit down and count the cost, whether he has enough to complete it?” Neither did he consult God as he did concerning his preferred successor – Pastor Umoh Eno. For God, who is not an author of confusion and failure would have told Udom Emmanuel that he is on a bootless errand and will need to ‘thief’ Akwa Ibom people’s money to fund it.

Oh yes, that is the money he is banking on to spend on his hopeless quest to become Nigeria’s president. As the executive governor of Akwa Ibom State, he has unfettered access to Akwa Ibom State funds. Just last month, he sought and got approval from the State House of Assembly for a loan of a whopping 150 billion naira clandestinely. It will interest you to know that the process was so secretive that it wasn’t read at plenary. The loan request was approved against the outcry of Akwa Ibomites, who expressed reservations after it was leaked to the press.

Presidency na your mate? I liken his ambition to that of a young man who thinks that having six-packs, biceps and muscles is enough to throw himself into a ring with a Deontay Wilder. Regular visits to a gymnasium is not enough to defeat a Wilder. Udom Emmanuel cannot defeat an Atiku in primaries, at least, not in Nigeria. In saner climes, it is Atiku that wouldn’t stand a chance against an Udom Emmanuel.

I can’t imagine the kind of money he will have to pay delegates from 36 states to pull this off. I weep for Akwa Ibom as I imagine the impact this money can make if Gov Emmanuel gives a 1million naira grant to 1,000 best entrepreneur ideas chosen by an unbiased panel from a competition of ideas in Akwa Ibom State. Imagine the kind of economic revolution, the multiplier effect on job creation that 1billion naira invested in this regard will have on the state? Unquantifiable!

He will rather share the same amount for 500 to 1,000 delegates. Over 3,000 delegates participated in the 2018 PDP primaries. The number is expected to swell. The APC has confirmed that 7,800 delegates will participate in choosing the flag bearer of the party. If he attempts to share 2million naira to 2,000 delegates, that is a whopping 4billion naira. The irony of it is that he won’t even garner 250 votes. Is the cost worth it? Can he spend the hard-earned money he made at Zenith Bank like this? Definitely not!

He is banking on Akwa Ibom people’s money. He is banking on wasting the 150billion naira loan recently approved by the State House of Assembly on the gubernatorial and presidential ambition of two men.

For emphasis and perspective, in 2020, Cross River and Ebonyi State received a combined annual allocation of 159billion naira (86b and 73b respectively) from the federation account. Gombe state received 72billion, Ekiti State received 74billion, Kwara State received 77billion and Edo, an oil-producing state received 99billion for a whole year. The combined allocation of two states is the loan amount our governor has requested at the twilight of his administration to lavish on electioneering. And he will compete with Peter Obi, who is reported to have left billions for his successor and not debts.

Your Excellency, if you do not disembark from this lost cause, there will be consequences. As the Lord liveth, you will account for the 150billion naira loan, other loans you took, Paris refund and the entire funds Akwa Ibom people have placed in your custody for 8 years. Nigeria is not Akwa Ibom State. Nigeria is not Canada, Spain, Switzerland or the US where things work. Nigeria is not even Ghana. You do not stand a chance at all. Not even with the billions from the Akwa Ibom State treasury. So please, leave our money alone or the consequences will be dire. A word is enough for the wise.