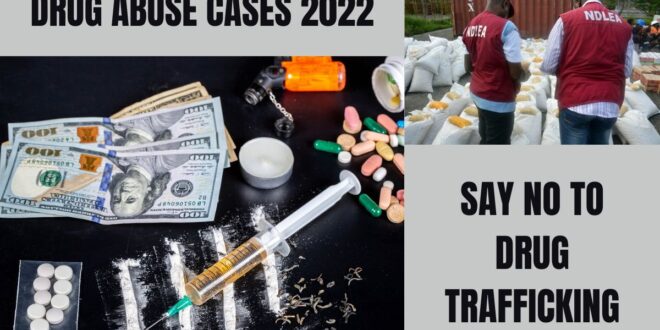 2022 has been littered with a series of jaw-dropping events that shocked Nigerians. Several events from the political sector, entertainment as well as security sectors among other sectors of the country, there have been dramatic moments in the year 2022, which impacted the nation either positively or otherwise.

Looking into the year chronicled some of the shocking drug cases that were uncovered in the year 2022.

Without mincing words, the year 2022 experienced heightened cases of drug-related offences, which put the competence of our drug enforcement agencies to the test, drawing speculation and criticism against Nigerian Drug Law Enforcement Agencies. Below is a list of the major abductions that shocked Nigerians in the year 2022;

On 3rd October 2022, one Ugochukwu Chukwukadibia was arrested by NDLEA with Tramadol. According to NDLEA, 13,451,466 pills of Tramadol (225mg) with a street value of N8, 860,000,000. The drugs were discovered in his mansion located at a highbrow residential estate, Victoria Garden City, Lekki area of Lagos state. It was reported that the estate also doubles as a warehouse for his illegal drug business.

On 18th September 2022, in what will appear to be the biggest singular cocaine seizure in the history of Nigeria’s premier anti-narcotic agency, NDLEA sized 1.8 tons of illegal drugs. According to NDLEA, the street value of the drugs in naira is worth N194, 775,000,000.

The raid carried out at a warehouse located at a secluded estate in the Ikorodu area of Lagos, had four drug barons including a Jamaican arrested by the agency. Names of arrested drug barons according to the agency are, Messrs Soji Jibril, 69, an indigene of Ibadan, Oyo state; Emmanuel Chukwu, 65, who hails from Ekwulobia, Anambra state; Wasiu Akinade, 53, from Ibadan, Oyo state; Sunday Oguntelure, 53, from Okitipupa, Ondo state and Kelvin Smith, 42, a native of Kingston, Jamaica. The arrest came as a shock and was recorded, as one of the biggest raids by the agency.

On 24 July 2022, NDLEA arrested two ladies and six men in Lagos state over alleged attempts to import hundreds of cocaine pellets into Nigeria.

The arrest came with stiff resistance from accomplices of the drug kingpin, as they mobilised youth to attack the officers, in a bid to prevent her arrest. This led to the death of one person as officers of NDLEA repelled the attack.

According to NDLEA, Kyari’s men had intercepted 25kg of cocaine, and he proposed a deal with NDLEA officers to keep part of the cocaine for himself. However, officers of NDLEA played along and found him wanting for drug-related offences. The drug case against Abba Kyari is still in court, and Judgement is yet to be pronounced.

Previous Why Are The Nigerian Most Rich States The Most Indebted?
Next Refurbished Fraud: Lagos State Special Committee on Rehabilitation of Public Schools Awards Contracts To Non-Existing Company