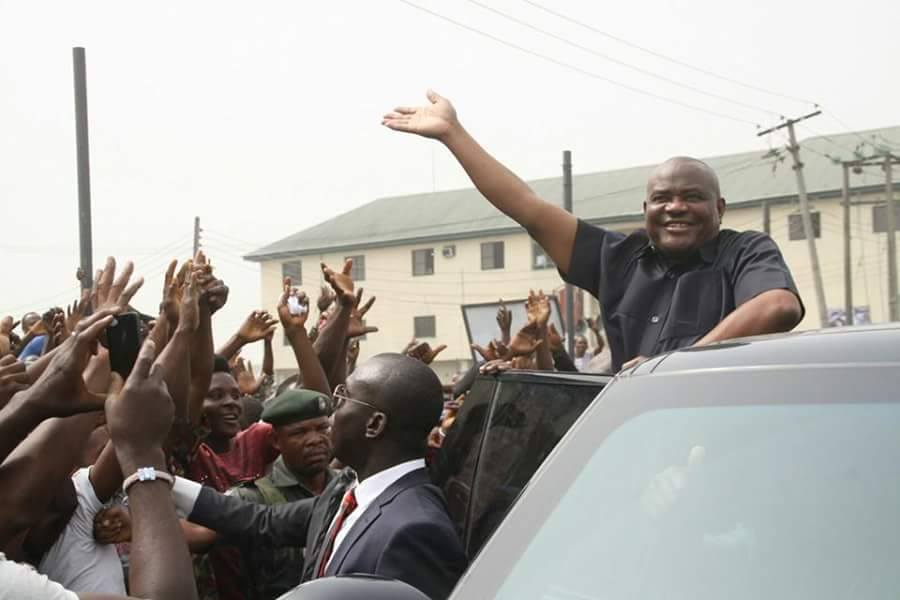 I WILL SO DEAL WITH GOV WIKE ONCE HE FINISHES HIS FOUR YEARS TENURE; SSS DG BOASTS AND THREATENS BEFORE REPS MEMBERS

At a meeting with members of the House of Representatives, Mr. Daura said the governor was only protected by Constitutional immunity, and would be dealt with once he loses his immunity, several sources at the meeting told PREMIUM TIMES.

The warning came when Mr. Daura appeared before the House Ad-Hoc Committee investigating the crackdown on the judges, two of whom sit on the Supreme Court.

Our sources said the SSS chief refused to fully cooperate with the committee and withheld details of the department’s arrests of judges in October, infuriating many members.

One source said Mr. Daura failed to disclose “anything spectacular” that could aid the committee’s inquiry, preferring instead to “tell us about how legal his agency’s actions were and who crossed his path.”
The SSS carried out the coordinated operation in different cities on October 7 and 8, and arrested seven judges.
The operation generated intense controversy, with many Nigerians questioning the powers of the SSS to arrest suspects of alleged corruption and economic crimes.

On October 11, the House of Representatives set up a committee to investigate the raids and its aftermath. The committee was inaugurated on Wednesday by Speaker Yakubu Dogara who condemned the operation and urged his colleagues to carefully examine whether the agency acted within its powers.

Mr. Daura appeared before the committee on Thursday, and immediately sought a private session with the members.
But some lawmakers said after extensive exchanges between them and the top intelligence official, they could not obtain useful details.

“It was a very important hearing but he insulted the sensitivity of all of us present by failing to provide anything useful that we haven’t already read in the media,” one lawmaker said furiously. He requested to speak anonymously because of the sensitivity of the matter.

At some point, some of the lawmakers said they queried why Mr. Daura requested an executive session in the first place.

“We made him understand that his cocky attitude was unacceptable and not in the best interest of our country,” another lawmaker said. “Yet this is why he took us into a private session.”

The SSS has become increasingly opaque since President Buhari appointed Mr. Daura last year. The agency, which used to have a spokesperson, immediately cancelled all channels of communications with the public and the media.
Lawmakers say Mr. Daura did not act any different on Thursday.

“He pushed back against all relevant questions that we asked him,” a lawmaker said, “preferring only to stick to his position that what he did was legal.”

The lawmakers said Mr. Daura stuck to his talking point even on the preparation against the arraignment of the judges.

“He refused to answer us, saying we will see the details we’re requesting when he presents them against the judges in court.”

The lawmakers said Mr. Daura issued a series of threats against some prominent citizens who spoke out against the conduct of the organisation in recent times.

Neither Mr. Daura not the SSS could be reached for comments.

But our sources said amongst those Mr. Daura threatened to deal with was Mr. Wike, who prevented the SSS from arresting a judge in Port-Harcourt during the raid, sparking a row between the governor and the agency at the time.
“He thoroughly condemned the actions of Wike. And vowed to take necessary action against him when he no longer enjoys immunity,” the lawmaker said. Mr. Wike took office in May 2015 and is expected to complete his first term in 2019.

One lawmaker said Mr. Daura acted as if he was the head of a secret agency.
The lawmaker said the committee would expand its findings to include questions about the SSS’ portrayal of itself as a secret organisation.

“The Defence Intelligence Agency is the organisation I know to be secret in this country,” the lawmaker said. “There may be others in the military or for financial intelligence, but I know for a fact that the SSS is not a secret organisation.”

Other agencies such as the EFCC and the ICPC also made submission to the committee yesterday, but they confined themselves to enumerating their constitutional role, the lawmakers said.

“Both of them submitted documents that are less than 10 pages just to basically explain what laws allowed them to do,” another lawmaker said. “But we decided to give them a pass because they were only dragged into a matter that does not concern them.”

“We all know the SSS is solely responsible for the arrest, detention and allegations of fraud against the judges.”

Previous SECRET PLOT: EX GOV UDUAGHAN CONCLUDES PLAN TO DEFECT TO APC TO CONTEST FOR 2019 SENATE TO STOP GOV OKOWA’S PROBE IN SECOND TENURE
Next 2019 FEVER: HOW OKOWA WAS BOXED TO A CORNER TO MAKE TOM AMIOKU AND EMEYESE BOARD MEMBERS OF CAPITAL TERRITORY DEVELOPMENT AGENCY