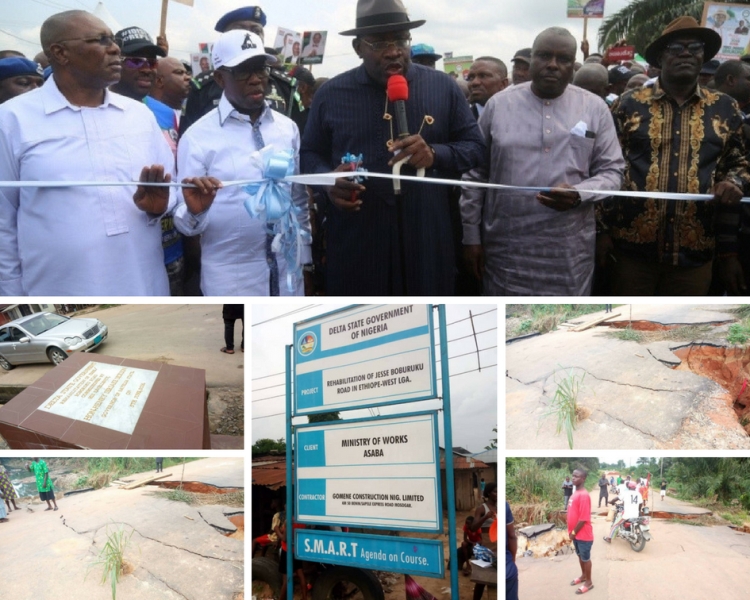 In every society it is sacrosanct that as a civic duty to its citizens, every government must provide basic amenities like security, water, light, education and roads.

And the Delta State Government may have just scored F9 in one of the newly constructed roads in the state, which has become a death trap to unsuspecting riders and pedestrians at night.

Findings by SecretReporters revealed that the 19.5km road which runs from Jesse to Boboroku in Ethiope-West L.G.A was constructed by Gomene Construction Nig. Limited owned by Godwin Ovie Omene for a contract whopping sum of N750millon and commissioned by Bayelsa State Governor, Seriake Dickson on invitation of Governor Ifeanyi Okowa on June 5th 2018.

According to impeccable sources, the award of the job followed no due process as the state executive council awarded the contract to Gomene, without bidding through the State Tender Board, headed by the Deputy Governor.

Investigations by our reporter revealed that the company which is alleged to be mushroom in standard and without the expertise to construct roads in such terrain, in a bid to pocket money belonging to Deltans resorted to using substandard materials, as on site assessment revealed that sharp white sand and asphalt were majorly used to construct the road.

“I can tell you for sure that Gomene never competed to get that road contract. He was merely told to just submit a tender letter with assurance that he will get the contract. He was asked to bring two other unknown companies that quoted over N1 billion, with his own as the lowest, just to give credibility to the whole process. It’s a kickback contract for election”, revealed a source to us via social media chat.

The road according to contractors of reputable companies would have been constructed for less than N500 million, with guarantee of ten years.

Environmentalists who commented on the picture of the failed road that went viral after one of our editors posted it noted that topographical assessment of the road by the company was not carried out and due to mediocrity did not comply with known industrial standards, as a mini bridge ought to have been constructed first by the contractor to create a canal which could have cushioned the effects of sharp flood or heavy downpour.

The road collapsed in less than one month and twelve days, after all the fanfare of inviting a governor from the south south to commission it. The Governor has since sent the Commissioners in charge of works and environment for on the ground assessment, while nothing has been said on the contractor who handled the job.

All efforts made to reach Godwin Ovie Omene as at press time were unsuccessful as he declined answering our calls and did not reply the text message sent to him.

Previous EKITI AND DELUSIONAL CORRUPTION FIGHT
Next RUMBLE IN THE SAVANNAH