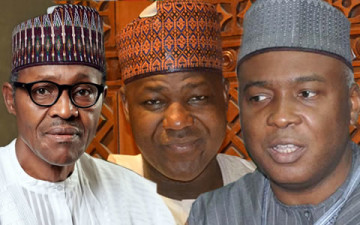 With due respect from your humble, uncontumacious, loyal and heartful comrade I greet you all, I write to bring this to your notice as a concern citizen of this country because we cannot fold hands and looking how present government is handling this country prematurely in so many aspects, fuel price inflation, problem of unemployment is increasing every day and lack of standard in our education sector imagine out of 100 best universities in the world there is no single university from Nigeria that is among very sadden and disappointment to this nation, the presented budget by mr president for 2016 which we are hoping and expecting maybe it will solve the present challenges in the country ,now we heard that the budget was not in their custody which is very bad and total irrational and unjustifiable as if we are all dense and oblivion about Nigeria politics.

How could a country like this caused commotion unnecessarily because the budget for 2016 was presented publicly and now we are hearing that the budget got missing and we have president, senate president and speaker even members of both senate and representatives from different district they fold their hands and looking without a concrete and progressive action to get it found, are they not ashameD of themselves that if they fail this country they are all failure.

President Muhammad Buhari on Tuesday, December 22, presented a 2016 budget proposal of 6.07 trillion naira these are the breakdown of the budget.Nigeria’s 2016 budget is based on a crude oil benchmark price of $38 per barrel and a production estimate of 2.2 million barrels per day for 2016.

The budgeted N300 billion for Special Intervention Programs, takes the total amount for non-debt recurrent expenditure to N2.65 trillion.
The Efficiency Unit set up by the current administration, together with effective implementation of GIFMIS and IPPIS, will drive a reduction of overheads by at least 7%, personnel costs by 8% and other service wide votes by 19%.

Moreover, The budget is even poor because I cannot see where it was stated that a specific amount is being budgeted for youths to created job for unemployment and during the campaign of Mr. President that if he finally emerge as the president he will progressively work for change in this country.

The National Association of Nigerian Comrades hereby call on Federal Government (Mr. President, senate president, national speaker, members of house of senate and representatives) to take a critical action to find solution to the issues on ground before is too late.

We voted for you people to lead us well not to maltreat us as if we are not human being and you gave series of promise during your campaign but now you have forgotten the promises you made.

We want immediate solution to the below problems:
Selling price of Petrol must reduce to a normal price which is #60 per litter because #86 is even exorbitant,Problem of unemployment to Nigerian youths must be solved.Missing budget must be found,Education in Nigeria must be revived and reposition, Nigeria security must be well tight to provide equipment for arm forces in Nigeria.