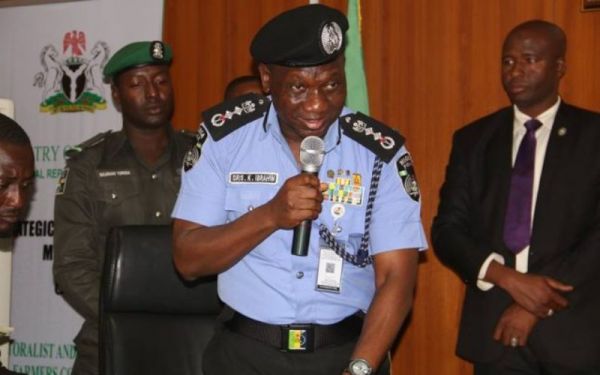 RANDY HE-GOAT IN POLICE UNIFORM: HOW IGP IDRIS GOT A BAR GIRL PREGNANT IN LIBERIA ON A DRINKING SPREE AND SECRETLY SENT HER TO USA

As the IGP Idris Ibrahim sexual and corruption saga gets messier, our well informed police source has revealed more dirty details to Secret Reporters through a letter. From the letter, it needs to oracle to confirm that Nigeria’s  IGP, Ibrahim Idris has a flair for sex sprees.

The anonymous well informed source revealed he is compelled to join the discussion, due to the reckless manner of the IGP and his trumpeters, who are shattering the already broken image of the Nigerian Police Force.

The highly placed Police source claimed to have first met Idris in Liberia where he was his commander.  From his letter, Senator Isa and Aisha Tosan recently made bold and unprecedented efforts to alert the public on the level of corruption, nepotism, sex scandals and incompetence on the part of the IGP.

They drew the attention of the authority to the manner the incumbent IGP is piloting the affairs of the NPF, leading it to imminent destruction; and has refused to pay heed to the cries of officer or responding to the allegations, but ran to the court to stop the Police from investigating him.

We gathered that the IGP shot himself in the leg when he deployed an equally dwarfed brain PRO, who only succeeded in exhibiting his limited knowledge and inadequacy about basic police duties in a live TV programme.

While speaking on the involvement of the IGP in sex scandals, he says. ‘’On the issue of sex scandal involving IGP Ibrahim Idris, I knew that right from Liberia. His sex mania can only be ignored by anyone who can’t see beyond the mobile uniform he is fond of wearing. Idris knows me to be blunt so let me remind him of Maria, the bar attendant in Monrovia he fell in love with during his drinking spree in her club. The affair led to pregnancy and like the case of W/DSP Antai- he tried to convince Maria to abort the pregnancy and sent me with SUPOL Maikanti, and one Ibo chief who runs a restaurant in Monrovia to mediate. When he saw scandal looming because Maria was ready to spill the beans, he quickly married her against the rules guiding public servants intending to marry foreigners. She is now living in US with his three kids.

His romance with women of the rank and file is countless. I see Idris as a man a cursed with a outrageous sexual lustful behavior in need of spiritual solution.’’

As a general summary on the corrupt practices going on in the NPF. Our source stated ‘’Whether his boot lickers like it or not, Idris lacks the capacity to lead such a complex entity like the police. The police has lost its ground in the fight against crime despite the stage managed by suspects like Kari and PRO.  But for the effort of the military, DSS, Civil Defense, etc. Nigeria would have become a state of anarchy where predators hold sway.’’

‘’I commend the Senate president for setting up a committee to look into the issues raised by the concerned senator. I Hope that with the chairman as a retired Brigadier General, Senator Hunkuyi and other men of integrity as members, there would be no carpet for the matter to be swept under.

As for these jobless scoundrels : SANTUMARI. BALA BBC UMAR EMMANUEL BARR EMANUEL BOKA MUHAMNADU MAI HOTO,etc. who are today more powerful than the DIGs; feeding fat on  police scarce resources; driving police official vehicles when some commissioners have none; making transfers and postings; occupying offices at the  headquarters and being the unofficial trumpeters of the IGP using the PRO office,  to them the day of reckoning is coming.

As for BALA BBC he should get ready to defend the CSO Asp Adamu  Shaba, when he is called upon to explain how he got money to build the multi-million naira mansion in Minna within one year. He should also explain the relationship between the IGP, his wife Asta, and the property at NO 15 Nun street off Danube Maitama and many other assets, owned by his paymaster and co scavengers.

On behalf of mentally bruised inspectors, rank and file police officers, I  commend Senator Isa and Aisha Tosan for the bold step; and warn those deep rooted corrupt individuals to retreat from trying to scuttle investigation, because the built up anger may consume them.’’

But the question has not evaded from the minds of Nigerians, it still looms, IS IT A YAY OR NAY? Or Nigeria’s phenomenon of looking more and seeing less.

Previous WHEN THE PAST COMES HUNTING: IS IGP IBRAHIM IDRIS A FACE OF SCANDALS OR JUST A RANDY SUPER COP?
Next GOV. GANDUJE LAUNCHES N540 MILLION LOAN FOR KANO CIVIL SERVANTS