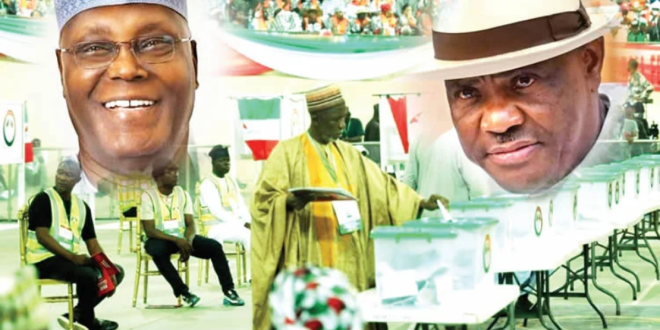 This week, chances are quite high that if you asked ten randomly selected Nigerians about the most “prestigious job” in the country today, the response would most likely be the same: “Party Delegate”.

The Peoples’ Democratic Party’s 764 delegates are just 0.000382 per cent of Nigeria’s estimated 200 million population, based on data from the United Nations Educational Scientific and Cultural Organisation (UNESCO). Yet theirs is the most coveted “job” in the country at the moment.

If the “most prestigious job in Nigeria” question is thrown even at medical students (who are on strike, by the way), the answer wouldn’t be “Medical Doctor” because they perhaps understand that their profession is considered important only outside the shores of Nigeria, especially in the United Kingdom, Canada, and the U.S where Nigerian medical professionals are migrating to in tens and hundreds. It doesn’t really matter that Nigeria’s ratio of one doctor to 5,000 patients falls short of the World Health Organisation’s recommended ratio of doctors to patients in the country, which should be one doctor to 600 patients. It also does not even matter that according to the United Nations population data for Nigeria, which is pegged at 215,063,351, there are 43,013 doctors available to attend to all Nigerians, leaving a huge deficit of 315,426 medical doctors.

No, these things don’t matter, really, because in Nigeria, even some politically exposed and well-connected marabouts and “native doctors” command more respect than trained medical doctors.

Similarly, a random response to the question of Nigeria’s most prestigious job among teachers-in-training won’t be “University Lecturer”, given that those ones have been perpetually shut out of the classroom for aeons.

Between 1999 and 2022, ASUU has gone on strike on a record 16 times, disrupting the academic trajectories of young Nigerians.

So, becoming party delegate is the big deal, the dream!

Interestingly, in the last few days, no one has publicly enjoyed the “dignity” that comes with being a party delegate like a young man in Kaduna named Tanko Sabo.

Sabo emerged the darling of many Nigerians on social media a few days ago for his “uncommon gestures” to his constituents. The Peoples Democratic Party (PDP) national delegate from Kaduna State reportedly donated over N12 million he got from the party’s presidential primary to the less-privileged in the Sanga Local Government Area of Kaduna State.

Given that Sabo spent his own largesse “judiciously”, with N6.9 million expended on “WAEC and NECO examination fees for 150 orphans and the underprivileged” and another N3.2 million on the purchase of 42 customised jerseys to promote sports, he was nicknamed “the delegate with a difference.”

But beneath the facade of “communal support” that Sabo’s largesse seems to project in the context of how the money was shared in his Kaduna community are fundamental issues that should worry those invested in the growth of Nigeria’s fragile democracy and party politics.

A quick context built around data could show that what ails Nigeria goes beyond Tanko Sabo and his N12 million “poverty alleviation” programmes in Kaduna.

The PDP presidential primaries came with all of the expected noise, subterfuge and tension-soaked drama. In the contest, there were 14 aspirants jostling for the attention and, ultimately, votes of 764 pricey wheeler dealers called ‘party delegates’.

The first significant takeaway from the result is the dwindling strength of Atiku, whose influence was whittled down by Wike.

For clarity, in the 2019 presidential election primary of the party held in October 2018, Atiku swept the polls by scoring 1,532 votes, while his closest rival, Aminu Waziri Tambuwal, polled a distant 693 votes. In Nigeria’s heavily monetised party politics, that the former Vice President’s voting strength dropped is perhaps a testament to his eroding financial power.

By a twist of fate, Atiku’s emergence in the last primary election was influenced by Tambuwal, who stepped down for the former Vice President.

Atiku defeated his closest rival and the Governor of Rivers State, Nyesom Wike, who scored 237 votes. Others who lost out include Bukola Saraki who garnered 70 votes; Sam Ohuanbunwa with just 1 vote; Anyim Pius Anyim with 14 votes; Udom Emmanuel with 38 votes; and Bala Mohammed with 20 votes.

Now, had Atiku and other aspirants garnered these votes on a platter of gold, perhaps the ‘job’ of a party delegate would have been made as worthless as that of a Nigerian varsity teacher – at least in the immediate Nigerian context.

But a quick look into the dollar deals beneath the figure could throw up shocking revelations.

Shortly after the primaries, details emerged that the delegates were paid between $10,000 and $20,000 each to vote for the major aspirants.

To be sure, signs that the primaries would be heavily “dollar-ised” were palpable a week ago when a frontline aspirant and now candidate of Labour Party, Peter Obi, opted out of the contest and left the PDP.

Then came the EFCC invasion of the primary venue and the last-minute withdrawal by another candidate, Hayatudeen, who equally complained of heavy monetisation of the process.

The most indicting complaints came from another presidential aspirant and immediate past President of the Pharmaceutical Society of Nigeria, Sam Ohuabunwa, who alleged that delegates could not resist the money offered them by the aspirants. He specifically alleged that the ‘four leading contestants’ heavily paid $10,000, $15,000 and $20,000 to each delegate during the party’s presidential special convention in Abuja.

Curiously, none of the leading candidates has come out to debunk the claim.

How much is the cost of each aspirant’s vote?

If Sam’s allegations are correct, then the candidate who garnered 371 votes to emerge winner must have coughed out an average of $7.2m (roughly over N3bn) to emerge victorious.

In the same light, other candidates who came behind must have coughed out between $3m and $5m at the primaries.

Now this is outside of the money expended on presidential forms (N40m for the PDP), media campaign, logistics, mobilisation and all what not.

All of these just within a SINGLE party in a marathon election that is still nearly a year away!

In contrast, in the midst of the dirty deals of wheeler dealers masquerading as delegates, the Academic Staff Union of Universities (ASUU) has remained on strike over poor funding.

What then is the cost of a Nigerian University?

Days ago, anchor and owner of the popular Human Rights Radio, Abuja, Ahmed Isah, announced that he is crowdfunding the sum of N18 billion for ASUU to return to class. The lecturers, due to funding and other key issues, have shut down Nigerians universities, throwing helpless young people onto the streets.

Given the humongous money in the hands of party delegates at the moment, in the context of government’s lackadaisical attitude, it’s plausible that some of the very ingenious and “cash liquid” delegates may be thinking of doing a valuation of some of our closed universities.

A Dataphyte analysis showed that between 2017 and 2021, ASUU spent 395 days on strike. Of 1825 days in the five years under review, the union spent one out of every four days on strike!

Within the years, while the government and political class have continued to claim that the nation is cash-trapped, thus abandoning key developmental issues that matter, an obscene amount of money is being spent on political circus shows and delegates’ votes.

As Nigerians look forward to the APC primaries, and as more delegates look forward to dollar rains, it’s expected that a solution would also be arrived at with regards to ASUU and Nigerian universities.

The expectation is that Ahmed Isah would succeed in mobilising Nigerians to support his fundraising initiative and get the teachers back to the classroom. Or alternatively, by some miraculous design, some moneybags with enough dollars would simply buy out the whole of Nigerian universities, pay off the Nigerian government, and settle the bills of warring lecturers so that students can peacefully return to their classrooms.

It doesn’t really matter if the buyers are party delegates.