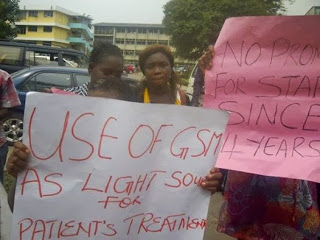 The Lagos University Teaching Hospital management came under fire Thursday as workers protested against bad policy carried out by the management under the leadership of Prof. Akin Osibogun.
The workers who carried placard to express their displeasure told our correspondent how the Chief Medical Director (CMD) has been deducting a minimum of N35,000 monthly from their salaries before the advent of the IPPIS. They noted that the protest is aimed at making him and his cronies to pay them all their arrears taken from them.

They also accused the CMD of not paying uniform allowance and yearly increment as obtained in all teaching hospitals; but ironically paid the last two during the ongoing strike action. Other issues raised include their non promotion which has been held for over ten years and refusal to pay overtime arrears.
Other workers who spoke to us in confidence accuse the management of deliberately making the infrastructures so bad with dilapidated equipment and shortage of manpower, with only the private ward receiving attention, since it fetch them money, which is diverted to private pockets. We gathered that they force people to go to the LUTH initiative which is a private concern within the hospital; a cash cow for the management.
They further accused the management of refusing to promote those who passed last year promotion exams under the guise that there is no vacancy. Also demanded is the implementation of the skipping policy and creating of directorate for the various deserving departments. They also complained of the limited number of staff, as they have to overwork themselves and demanded that more staff be employed in fulfillment of the management promise to do so since 2011