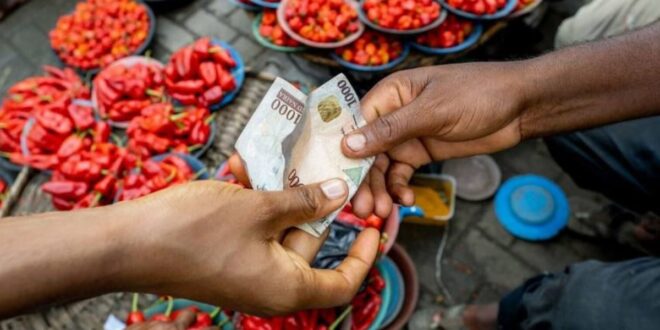 Is Dollar Also Responsible for the Rise in the Cost of Locally Processed Foods Like Garri, Local Rice, and Others? What You Should Know!

Some Nigerians may be curious about the reasons for the country’s ongoing inflation, particularly, the rising prices of food locally produced in the country like yams, local rice, local beans, and garri.

Aside from insecurity and season, many Nigerians don’t know that living in this country is largely dependent on the foreign currency called the US dollar.

A yam farmer in the bushes of Benue shouldn’t be concerned about the rising dollar rate, according to the average Nigerian. They are puzzled as to why a cup of local rice they purchased last month for N70 would cost N100 this month.

The rising inflation rate in Nigeria has surprised some individuals, who are perplexed as to why locally manufactured goods, including Garri made in rural areas, would also continue to increase in cost.

But the reason is simple; Nigeria produces some of the food it eats, but because the nation is totally dependent on other countries for several things, even though it gained independence in 1960, the price of food is greatly influenced by the value of the Naira in relation to the foreign currencies, especially the US dollar.

A similar increase is witnessed with Euro which costs about N422.1994 and a pound sterling which is about costs N501.731.

As of today, dollars sell for about N705 in the black market, where there is a large amount of exchange.

When an “Okada” man charges you N100 for a distance that used to be N50, do not think it is because of the price of fuel alone or scarcity, he could be charging you to be able to pay back the “cooperative loan” they took to be able to purchase the motorcycle or to meet up with the remittance for higher purchase. The prices of motorcycles and cars are not what they used to be. Motorcycle sold for N180, 000 in 2019 is about N350, 000 – N400, 000 in 2022. So, when “Okada” charges a Garri seller a high transport far, a buyer should expect a hike in the price of the Garri.

In Q1 2022 alone, motorcycles worth N74.593 billion, used cars worth N72.321 billion, and automobile and aircraft components worth N456.320 million were imported from countries like India, China, and Indonesia, according to statistics from Dataphyte.

Once more, the cost of transportation rises in direct proportion to changes in the price of oil or its unavailability. According to an NBS analysis that was recently published, transportation costs increased between June 2021 and June 2022. This is also connected to the exchange rate for dollars.

Nigeria, a producer of crude oil, imports refined fuel from countries such as the US, India, Turkey, France, and the Netherlands, and because the US dollar is the most widely used currency, the impact of a rising Dollar to Naira exchange rate will have an impact on how much more Nigeria spends on importing refined petroleum.

The cost of interstate and intrastate transportation is impacted by this. For example, you would not anticipate your transportation from Nyanya to Berger to remain the same if the price of refined petroleum and landing costs increased.

Apart from the exchange rate, population growth also affects how much locally processed food costs. It signals a food shortage in the area. Even while there is enough food produced worldwide to nourish everyone, not always those in need receive it or the technology to generate it. Over 400 million people are chronically malnourished and approximately 1 billion people do not get enough to eat as a result of food shortages. Each year, 11 million children under the age of five pass away from diseases brought on by starvation, according to Lean, Hinrichsen and Markham, 1990.

The National Population Commission puts that Nigeria had 45,138,458 people at the time of its independence in 1960. The population of the nation as of Thursday, September 8, 2022, according to Worldometer’s elaboration of the most recent United Nations data, is 217,275,625, with the difference in cumulative annual growth standing at 172,137,167. Nigeria’s population has been growing for the past eight and a half years, averaging 4 million new residents every year. But despite the alarming growth, the amount of usable land has remained static at 910,770 Km2 (351,650 sq. miles). This is aggravating the nation’s food issue since it reduces the amount of farmland that can be used by a community’s residents.

While poor government and corruption can be largely held responsible for the ongoing inflation, Nigerians’ way of life and consumer habits may be able to help.