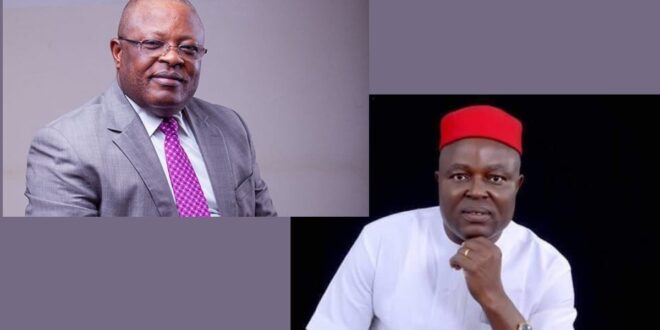 The family of the outgoing governor of Ebonyi State and senatorial candidate of the All Progressive Party, Mr. David Umahi has defrauded the people of the state severely, as exposed by an investigation by Secret Reporters. The governor gave the contract for constructing a generator house at the state international airport to AUSTAC INTEGRATED SERVICES, a company owned by his younger brother, Austin Chukwu Umahi, while they were pretentiously running for the senate ticket against each other.

The contract, titled “CONSTRUCTION OF PROPOSED GENERATOR HOUSE AT EBONYI STATE INTERNATIONAL AIRPORT,” was awarded on June 25, 2022, by the Ministry of Infrastructure Development for Concession, under the leadership of Eng. Nweze Fidelis Kings, commissioner of the ministry and Chairman of the Nigerian Society of Engineers, Ebonyi State Chapter. The contract’s total cost was N62, 932,875 (Sixty Two Million Nine Hundred and Thirty Two Thousand Eight Hundred and Seventy Five Naira), which is over three-fold of the N20, 000,000 (Twenty Million Naira) allocated for the project in the state’s 2022 budget.

According to documents obtained by SecretReporters, two other qualified bidders for the contract, ZIMSOK INTEGRATED SERVICES LIMITED and DIAMOND JOSHAM INTERNATIONAL LIMITED, were turned down in favor of AUSTAC INTEGRATED SERVICES, which has other family members on its board of directors, in a clear violation of section 21 (19) of the Ebonyi State Procurement Act, 2020, which states that, “Persons who have been engaged in preparing for a procurement or part of the proceedings thereof may neither bid for the procurement in question or any part thereof either as main contractor or sub-contractor nor may they cooperate in any manner with bidders in the course of preparing their tenders.”

Additionally, it is blatantly against section 21 (1) (a) (b) of the State’s Public Procurement Law, which states that all public procurement must be made through open competitive bidding; and in a manner which is transparent, timely and equitable for ensuring accountability and conformity with this Law and regulations deriving therefrom; With the aim of achieving value for money and fitness for purpose.

The contract racketeering which is evidence of lack of adherence in practice to procurement rules and compliance with the provision of the Procurement Act, is a crime frowned at by The Independent Corrupt Practices and related offenses Commission, ICPC, in the case of a senator representing Kano North, Barau Jibrin, and his family company, Sinti Nig. Ltd, which was awarded a contract by Sokoto Rima Basin Development Authority in the sum of N199,950,000 for a project to supply empowerment items in Kano North Senatorial District. The ICPC in its report said, “The dramatis personae in the conception and implementation of public-funded projects use the influence of their office for personal aggrandizement to the detriment of the public.”

David Umahi and his younger brother, Austine Umahi contested the APC senatorial ticket of Ebonyi South Senatorial District. The governor later emerged as the candidate of the party after allegedly substituting his name with that of his brother on a mutual ground in accordance with the new Electoral Act. Though, there were reports of a rescheduled primary election won by the governor.

Austine Umahi had won the senatorial ticket in a primary election on May 28, 2022, at Afikpo North Local Government Area Headquarters.

On June 8, Bola Tinubu defeated David Umahi and other candidates in the APC presidential primaries. Mr. Tinubu scored 1, 271 votes while Umahi got 38.

Though the administration of Umahi has some projects to its credit, Ebonyi State has remained seriously poor while government officials loot funds through bad practices such as awarding of contracts to cronies.