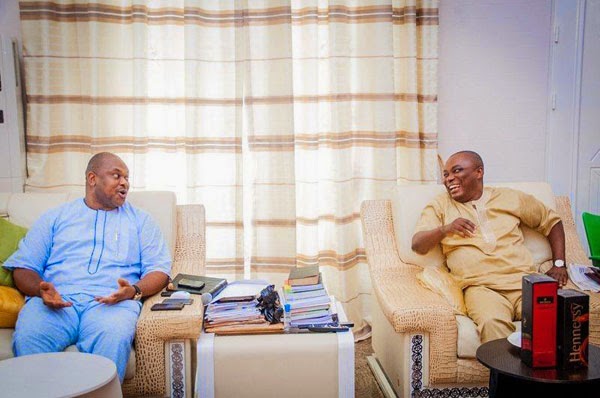 That former Speaker of the Delta State House of Assembly, Victor Onyekachi Ochei is rude is no news, but that he took his arrogance to the presidency we can report has cost him the Senatorial ticket already.

Ochei who ran for the governorship position under the Peoples Democratic Party (PDP) but lost, quickly decamped to Accord Party to realize not his guber ambition but to replace Senator Ifeanyi Okowa in the Red Chambers.

What is unknown to Nigerians is that prior to the PDP primaries, Ochei was summoned to Abuja by the Presidency in a meeting which had key PDP National Excos present as well as Okowa.
The meeting which held at the Transcorp Hilton hotel we gathered from a source was to mediate between Okowa and Ochei. It was unanimously agreed that Ochei should step down for Okowa in order to present a unified candidate for the Aniomas, since he alone posed the biggest threat to Okowa emergence from Delta North angle.

Arrogant as ever, he insisted that Okowa step down for him, boasting that he has the grassroot support to win the election. All pleas by the presidency and the PDP to make him change his mind proved abortive.

Then came the carrot; he was dangled the PDP Senatorial ticket on a platter of gold if he will step down, but the enfant terrible politician insisted on having his way to become the State Governor under the party. He was reminded that Obong Bassey Albert of Akwa Ibom State was a strong contender for his State Guber race, even stronger than Ochei, but again, the ex Speaker who was kicked out from his position like a thrash of sucked orange stated that Akwa Ibom is politically different from Delta.

Secrets Reporters contacted a member of the PDP, who was aware of the secret meeting held to enquire what happened and was told that President Goodluck Jonathan was miffed to know that a mere House of Assembly member could disobey party orders, and vowed that even if he had won; the ticket would have been taken from him and given another person.

We can report from confidential sources that he spent over a N700 million in his failed ambition. “Oga spend money no be small. We were always putting money inside big brown envelopes to give to traditional rulers and politicians while he gave dollars during the day of the primaries. I fit tell you say oga spend pass N700 million for that primary”, a reliable source confessed to this paper.
Over N2 billion has again been earmarked for his Senatorial ambition, boasting that he will win Peter Nwaoboshi effortlessly. He had boasted same way during the guber primaries that he will run Okowa out of town with money, which obviously would have been true, since he stole Deltans common wealth during his days as Speaker. The Presidency we learnt has vowed to teach him a lesson by making him lose the Senatorial election and driving him back to his village where he remains politically crippled and dumb

Already, the IPP project in Oghara which he got the contract for has caught fire, despite taking over N40 billion for the project and not laying a single pipe on the ground. Hush tones among Deltans point fingers at Ochei as being behind the burning in order to make excuses following recent criticism of the project by Secrets Reporters and other social commentators.