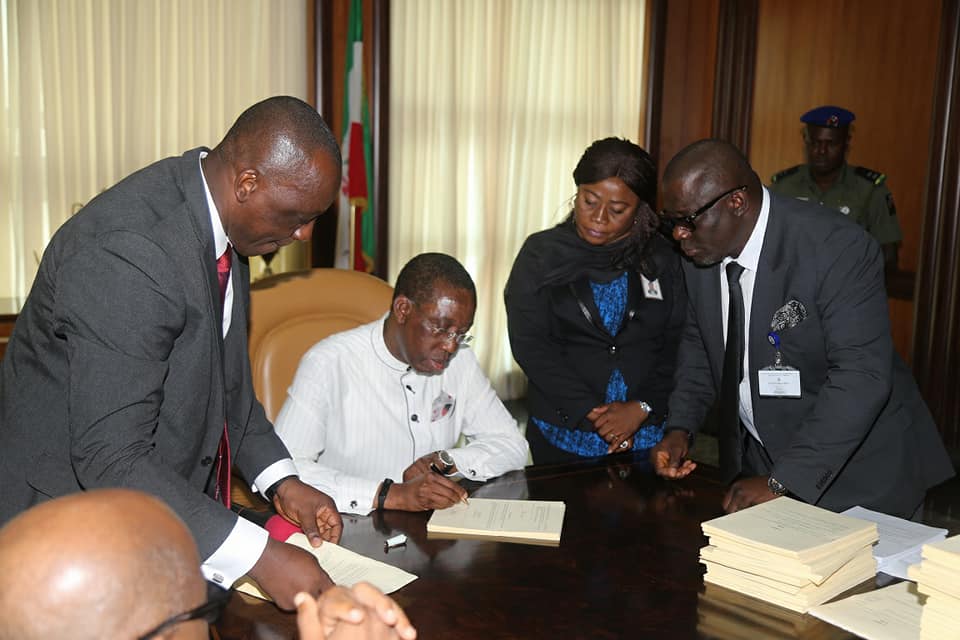 EXCLUSIVE: GOV. OKOWA CRIMINALLY RUNS DELTA STATE WITHOUT APPROVED 2017 BUDGET AS LAWMAKERS WERE FORCED TO ASSENT TWO PAGE PAPERS HE SENT TO THEM AS BUDGET

All the contracts currently awarded by the Delta State Governor, Mr Ifeanyi Arthur Okowa for 2017 are not in the 2017 fiscal year budget, Secret Reporters can authoritatively report.

Impeccable information available to Secret Reporters revealed that contrary to claims and pictures of Mr Okowa and the Speaker of the State House of Assembly Speaker, Rt. Hon. Sheriff Oborevwori signing the 2017 budget in the Governor’s office, the undiluted truth is the Speaker was forced to sign an empty page of paper at the last end of numerous sheet of paper bound together.

We exclusively gathered that the Governor in an apparent bid to allegedly loot Delta State silly and pile up money for 2019 election devised a means to evade prying eyes by sending only two pages of papers to the twenty nine House of Assembly members, compelling them to approve it as the 2017 budget which they grudgingly did.

“On the day the governor claimed to send us the budget for scrutiny before approval, what all of us held were just two sheets of paper. Till date, none of us, not even the Speaker has seen the budget, but we were forced to agree that we had gone through it and approved it for passage”, one of the lawmakers confided in this newspaper.

CRIMINAL IMPLICATION OF NOT HAVING A BUDGET

With the state not having a 2017 budget, Okowa we gathered from eighteen legislators has committed an impeachable offence, but they are challenged on who will move the motion to begin his impeachment process.

Sources who reached out to us narrated how Okowa simply awards contracts to his cronies and once his State Executive Council (SEC) accepts it; he allegedly calls the Commissioner for Economic Planning, Mr Kingsley Emu who’s in charge of budget to input it as part of the projects ‘passed’ by the rubber stamped House of Assembly.

“Okowa is running a blank budget. What it means is that only he knows what is in the budget. Once he awards it, he just fills in the blank spaces of the contracts and the process continues till he fills up the entire pages. Challenge him to produce the budget that the Speaker signed page by page in one hour and he can never produce it”, one of the lawmakers lamented to us.

With none of the lawmaker having a budget, Okowa is simply running a one man show and deciding without recourse to any legal framework to work with, informed sources told this medium.

This will be the first time ever a Delta State Governor is ruling a state without a budget.

Secret Reporters wrote to the Speaker of the House of Assembly as well as the Commissioner, Ministry of Economic Planning, Kingsley Emu, under the Freedom of Information Act since September 2017 but they refused to produce it since they have no copy, while Kingsley who has a copy only on his computer system as blank Microsoft Excel Sheet also refused to answer our request. A case has been filed in court challenging their refusal to accede to our request.

Various calls placed to the Governor as well as the Chairman, House Committee on Information, Mr Tim Owhofere to get their comments on this issue were not answered.