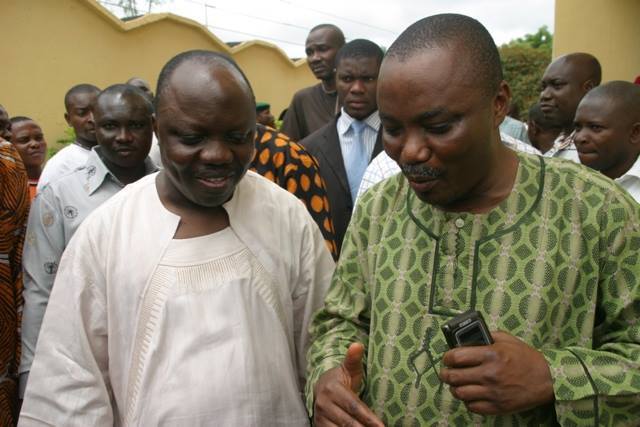 ENDTIME CONFESSION: FMR GOV. UDUAGHAN IS SITTING ON BILLION DOLLARS; SENATOR NWAOBOSHI INDICTS HIM IN STATEMENT TO EFCC WHILE UNDER DETENTION

2018 may be a fresh year of trouble for Fmr. Gov. Emmanuel Uduaghan as he will resume another round of visits to the office of the Economic and Financial Crimes Commission (EFCC) for serious interrogation, Secret Reporters can report without challenge. He will be facing this trouble with a top National Assembly member from Delta State.

We gathered from our ever reliable sources in EFCC that renowned charge and bail lawyer who was elected to represent Delta North in the National Assembly. Mr Peter Nwaoboshi was nabbed by the commission where he sang like a canary bed and wrote indicting statement against key political office holders in the state.

In the course of interrogating him, he was asked how he got money to buy the Guinea House which is currently sealed and rotting away. One of our EFCC sources who partook in questioning him told us verbatim what the embattled senator said. “Am I the only one that bought Delta properties? Is Kpokpogri and that his friend not aware that Uduaghan bought the state properties in Lagos, Warri and Benin? Are they not aware of the state properties bought by a National Assembly member but because Uduaghan and the man has paid them heavily and I didn’t pay them, they focused on me and left them alone. They know all the locations of these properties the other people bought. Tell them to also write petitions against them. I will not fall for their game. If my own should be seized, Uduaghan and others should be forfeited. The former governor is sitting on billions of dollars but what has him and his friend done about it. Why am I the only one they are after?

According to Nwaoboshi during his confession, Uduaghan stashed away billions to use in contesting for the Senate race in 2019 and urged the EFCC to begin his prosecution if he must also be prosecuted and stopped from contesting the next elections. He expressed disappointment that nothing has happened to the National Assembly member who saw them sharing the properties among themselves and bought for himself at a cheap price, but “pretending that he’s a saint because he has bribe journalists and integrity group from focusing on his activities”. He penned down all the addresses of the state properties bought by Uduaghan and other government officials.

He will be reporting to the commission fortnightly while Uduaghan and others will be invited for questioning and detention as soon as petitions to such effect get to their table.