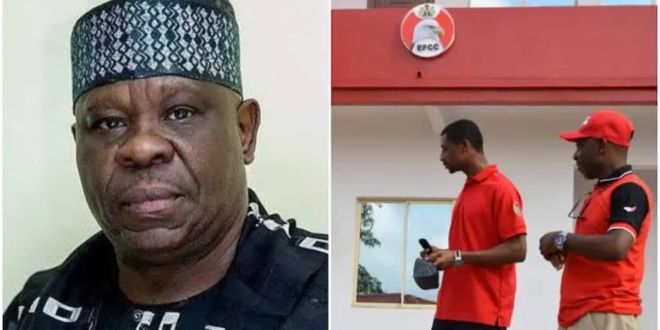 The Federal High Court, Abuja, on Thursday, granted the Economic and Financial Crimes Commission (EFCC)’s request to seize landed property and cash of N120,546,042.02 and $228,428.16 allegedly linked to a retired Air Force officer, Saliu Atawodi, and his wife, Winnie.

The judge, Emeka Nwite, gave the final forfeiture order in a ruling in a motion filed and argued by the EFCC’s counsel, Ekele Iheanacho.

Named as third respondent in the motion marked: FHC/ABJ/CS/537/2020 is a firm, Vector Integrated Limited.

An EFCC operative Osas Azonabor who investigated said it was investigating allegation of public funds diversion perpetrated while Atawodi, a retired air vice marshal was the Chairman of the Presidential Implementation Committee on Maritime Safety and Security (PICOMSS)

The commission gave details of how the retired Air Force chief allegedly syphoned state’s funds, using his wife, who was a manager with Union Bank of Nigeria Plc between 1982 and 2015.

Osas further stated, in the supporting affidavit, that “the 1st respondent (Atawodi) was appointed the Chairman of PICOMSS in 2006.

He held the position between 2006 and 2012. In that capacity, he was administratively in charge of the day to day activities of the committee.

“As the Chairman of PICOMSS, the 1st respondent was a signatory to all the bank accounts of PICOMSS in Union Bank Plc, Zenith Bank Plc, Oceanic Bank Plc (Now Eco Bank Plc) and Skye Bank Plc (now Polaris Bank).

“Xanatos accepted the award of the contract and the agreement was reduced into writing between PICOMSS and Xanatos Limited.

“the case revealed how Union Bank Plc account of Auswee Investment Ltd was opened in the Maitama Branch of Union Bank whose branch was under the administrative control of the 2nd respondent as the bank’s employee.

Osas said that the account of Auswee Investment Ltd was opened using a false Board Resolution dated 18th June, 2010 which was purportedly authorised and procured in the name of Chief Asiruwa Uhuango to be the sole signatory to the said company’s account.

“In 2011, the 1st respondent whilst still the chairman of PICOMSS personally invested the sum of $5,000,000 with Mr. Mohammed Jibrin the Managing Director of Suntrust Saving & Loans Ltd in cash.

“The said sum of $5,000,000.00 investment yielded interest of $1,120,000.00 and both principal amount and the interest were subsequently transferred to Asset & Resource Management Company Ltd (“ARM Investment Managers”) in 2013 for further investment in favour of the respondents.

“Both 1st and 2nd respondents have largely invested these funds in acquisition of properties both locally and internationally.

“The respondents who operated several bank accounts where billions of naira were deposited in local and foreign currencies did not explicitly explain the sources of the cash.

“As a former public officer, the 1st respondent failed and refused to declare his assets to the Code of Conduct Bureau either while in service or upon leaving office.

“As a banker, the 2nd respondent never declared her assets despite operating numerous bank accounts in her name, fictitious names as well as corporate names in Fidelity Bank, where funds running into billions of naira were deposited into the accounts (in local and foreign currencies while she was in the employment of the bank,” the EFCC said.

Previous EXCLUSIVE: HOW NNPC GM MUHAMMAD ABALI SECRETLY BOUGHT A HOUSE IN DUBAI FOR OVER N300 MILLION
Next Police Salary Increase: How IGP Alkali Struck A Gold, Why He Should Be Commended