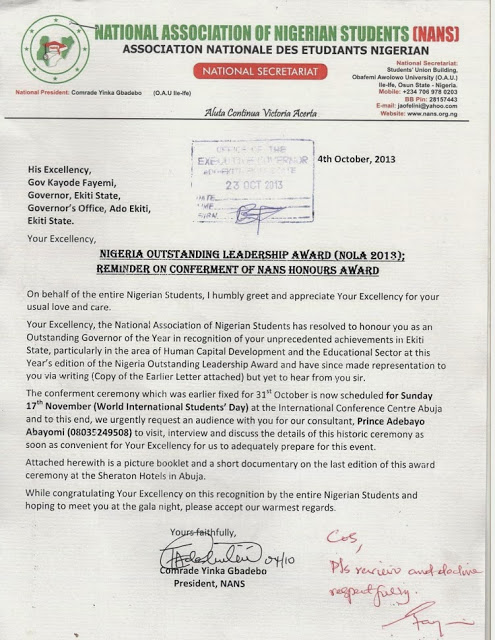 The recent attack on Governor Kayode Fayemi by the President of the National Association of Nigerian Students (NANS), Mr. Adeyinka Gbadebo has been traced to a recent award that was to be conveyed on him by the NANS president, which the governor rejected.

In one of such attack, the NANS president sent a statement to Amnesty International saying “The National Association of Nigerian Students (NANS) wishes to call on Amnesty International, The National Human Rights Commission (NHRC), Civil Societies and well meaning Nigerians to rise into the defense of the downtrodden people of Ekiti State before the state Governor, Dr. Kayode Fayemi destroy, kill and ruin them with his inordinate second term’s ambition.
From the umpteenth time, we have watched in aghast as democracy is being threatened by Fayemi in Ekiti. Apart from taken education out of the reach of common people in the only state-owned university, Fayemi has taken governance to a strange level by maiming, attacking and killing anyone perceived to be a threat to his second term’s ambition”.
In a document made available to us, we gathered that the student leader on October 4th 2013 sent a letter to the governor, detailing him of his intention to confer on him the award of “Nigeria Outstanding Leadership Award”, which we have discovered to be authocratic without the consent of the entire students’ executives.
We also gathered that he went to see the governor’s Chief of Staff, Yemi Daramodu to pressure the governor to make a fellow called ‘democracy” the special assistant to the governor on students’ matter, which the governor declined again. An impeccable source stated to us that the governor who was a student activist in his days is not comfortable with his self styled forced leadership.