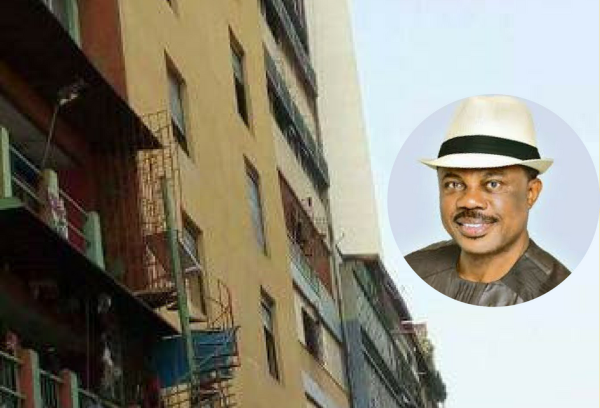 In another desperate and innocuous bid to retain the governorship seat in the state, Governor Willie Obiano has taken another shocking step to raise money to fund his 2nd term bid.

The Anambra House located at 23-25 Martin Street in Lagos has been sold out by the governor to an Anambra transporter who bought the building at less than a quarter of its actual value.

It’s on record that when the house was built, the incumbent governor was more or less a baby and as such, it’s ridiculous that he’s the one sanctioning its sales. The 7-Storey building is valued at N6 billion, but it’s been sold off by the governor at an absolutely ridiculous rate of N987 million which is less than a quarter of the valued price.

The said buyer has immediately commenced renovation and reconstruction of the entire building illegally sold by the governor. The decision to sell of the house was not discussed by the State Executive Committee, neither was it advertised for bidding to prospective buyers nor published for the public to take notice and show interest as demanded by law. The entire process was shrouded in secrecy by the governor to satisfy his selfish interest.

Governor Willie reportedly claimed it’s useless to save for the State. He’s alleged to be buying properties the world over with government funds and incurring more debts to the state as a result. Instead of saving, he’s busy squandering the little saved up by his predecessors to the detriment of the state and it’s citizens.

Sources revealed that the process of selling the Onitsha Lodge is currently ongoing and like the Anambra House in Lagos, the process is shrouded in secrecy and the lodge is not been advertised for bidding to interested members of the public.

Critics of the state government noted that if Governor Willie Obiano is re-elected in the forthcoming election, he might eventually end up selling off the state with his reckless spending and probably use the proceeds to fund his flamboyant lifestyle which includes buying of exotic and customised Champagnes.