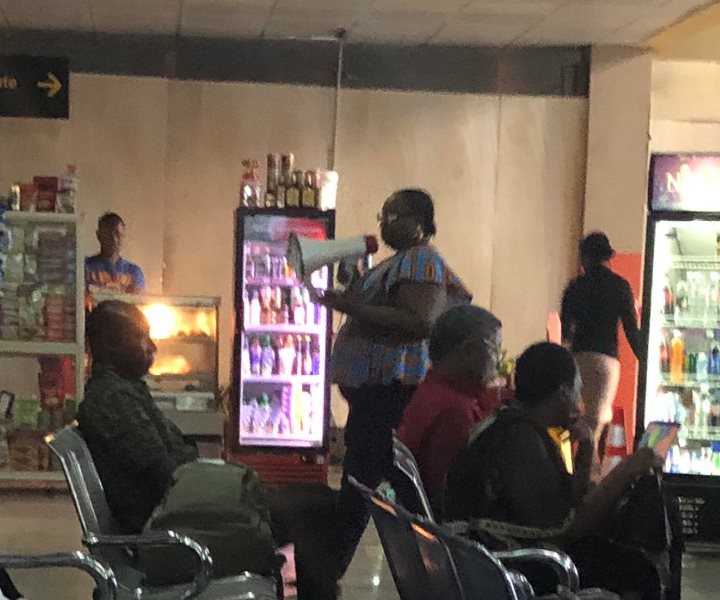 With the technological advancements in the Aviation industry in this 21st century, it is sad to note that despite efforts and mechanisms put in place to ensure that Nigerian airports operate according to world standards, these efforts may have gradually been washed down the drain.

This is evident in the International Cargo Airport situated in the eastern heartland of Oweri which was speculated to be commissioned early this month after being upgraded with the aim to boost the economy of the state as SecretReporters learned that the Airport may be nose-diving to its nadir with flight arrivals and departures now announced through handheld megaphones as though it was a street evangelism or ‘morning cry’.

“I actually thought the megaphone was a temporary measure last month when I was in Owerri. Apparently it’s a standard procedure” stated a passenger who regularly ply the owerri route.

The airport which commenced operations in 1994 under the regime of the former military administrator, Navy captain J.N Aneke we also learned underwent an upgrade in 2013 through 2014 that covered its infrastructural and communication equipments, and in turn generates revenue for the Federal Aviation Authority of Nigeria (FAAN) from the various airlines plying the Owerri air-route through charges like landing fee, parking fee, passenger service charge and many others.

Many Nigerians especially passengers who regularly use the Sam Mbakwe International Cargo Airport are of the opinion that considering the amount of money gulped for the renovation and upgrading of the airport to its present status, it is a huge slap on the face of the country that handheld megaphones would be the preferred choice of public address system for an airport with international status in a digitalized era.

Previous CENTRAL DARKNESS: DESPITE BILLIONS OF FOREIGN GRANTS AND ALLOCATION TO EDO STATE MINISTRY OF HEALTH, HOSPITALS REMAINS IN THICK DARKNESS AT NIGHT DUE TO LACK OF POWER
Next THE EMEFIELE TAPE, ANNOTATED- WHAT WAS THE CBN GOVERNOR DISCUSSING ON THE RECENTLY LEAKED TAPE?