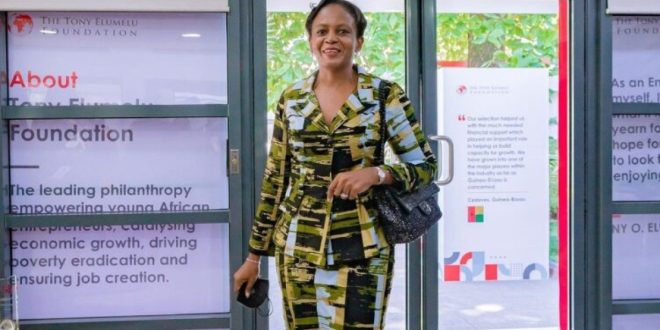 Like Tony, Awele Elumelu is uplifting female entrepreneurs in Africa

Ever wondered why the Elumelus have continued to rise from grace to grace? The reason is simple: humanitarian and philanthropic gestures run in their DNAs.
Not much has been heard of Dr. Awele Vivien Elumelu, the elegant and brilliant wife of Nigerian economist and astute banker, Tony Onyemaechi Elumelu, chairman of United Bank for Africa (UBA). This is because the medical doctor of repute is another silent philanthropist in the Elumelu dynasty.

The English expression, ‘birds of a feather flock together’ best describes Tony and his wife, Awele. One can only say that dragons marry dragons and tigers marry tigers. Tony and Awele are obviously a match made in the Heavens. Together, the power couple has gone from grass to grace.

Unknown to many, Dr. Awele, a trustee of the Tony Elumelu Foundation (TEF) is the brain and pivot of the foundation’s unending support for female entrepreneurs in Africa.

For over 10 years, the amazing couple, whose marital journey began in 1993, through the foundation, has empowered thousands of women and men across the 54 African countries, by catalyzing economic growth, driving poverty eradication, and ensuring job creation. Their commitment stems out of the philosophy of Africapitalism coined by Tony; the ambitious theory that the African private sector has the potential of transforming the African continent.

So far, the foundation has trained, mentored, and funded over 10,898 young African entrepreneurs across all 54 African countries through its entrepreneurship programs, and has provided capacity-building support, advisory and market linkages to over one million Africans through its digital networking platform, TEFConnect.

This year, as part of the TEF Entrepreneurship Programme, Dr. Awele who is also the founder and chairperson of Avon Healthcare Limited, an indigenous long chain of clinics and healthcare facilities firm, ensured that the female folks got the lion’s share of the foundation’s annual non-refundable grant to young African entrepreneurs. Of the total beneficiaries of 4,949 and the total sum of $24.75 million, about 3,369 young women received $16.8 million which makes up over 68 percent.

Dr. Awele who clocked 51 in June, this year, is a rare gem and has been a role model for career women across Africa. She has also contributed a lot to the well-being of humanity through her field, in various capacities. Her philanthropic gestures are unmatched by any other female in the African continent.

The superwoman believes that being a female entrepreneur in a sea of men can have its challenges, but its rewards are priceless. “Excellence is more of an attitude than skill. Hence, crucial to excel in entrepreneurship in any industry, the woman must possess the following qualities: patience, positivity, confidence, curiosity, gut to stand out, resilience and perseverance.” She had said.

Awele is no complacent or lazy woman whose whole world revolves around the activities and achievement of her husband alone, but she also takes up responsibilities that get her to the front scene.

The mother of seven who also oversees the healthcare investments of Heirs Holdings, one of Tony’s conglomerates, holds a Bachelor of Medicine and Bachelor of Surgery degree from the University of Benin. Her experience as a medical doctor includes medicine, surgery, pediatrics, obstetrics and gynecology, and emergency medicine. In Nigeria, Dr. Elumelu has worked with the Lagos University Teaching Hospital and, in the UK, with Grantham and District Hospital, Grantham.