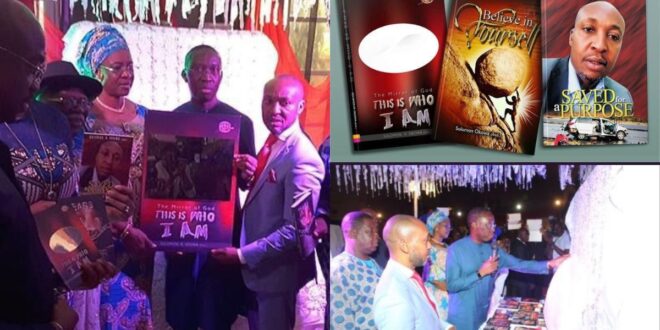 According to the document, Okowa, who is the Vice Presidential candidate of the People’s Democratic Party (PDP) for the 2023 election, was the Special Guest of Honour at the launching event, which was held on Sunday 19th April, 2017 at Orchid Hotel, DBS Road, Asaba, Delta State.

In the document, titled “PUBLIC PRESENTATION AND LAUNCHING OF THE BOOK. WHO I AM/ SAVED FOR A PURPOSE,” which was signed by the then Secretary to the State Government, Festus Ovie Agas, the Governor scooped a whooping sum of five million Naira from the 2017 budget of the State to launch his brother’s book.

The document reads: “His Excellency the Governor’s attention is invited to the invitation card at page 38 of file by which Mr. Solomon Okowa has invited His Excellency, the Governor, as Special Guest of Honour to the Public Presentation and Launching of his book titled. THIS IS WHO I AM/SAVED FOR A PURPOSE. The event is scheduled to hold on Sunday 19th April, 2017 at Orchid Hotel, DBS Road, Asaba, Delta State, at 12.00 noon.

“Other notable invitees to the occasion include; Chief JU Oguma as Chairman, Engr. Gabriel Ogbechie as Chief Launcher. Chief Osiobe Okotie as Guest of Ilonour and Prophet Dr. Emmanuel Opia as Book Reviewer”.

“Having been invited as a special Guest of Honour to the occasion, it is expected of His Excellency the Governor, to launch the Book. To this effect, the sum Of N5,000,000 (five million naira), donation towards the Public Presentation and Book Launch is recommended. The recommended amount can be met from Head 413A. Sub-Head B (ii)- Gifts and Donations in the 2017 Approved Budget”.

The document added that “His Excellency, the Governor, is accordingly invited to note the foregoing and approve the release of the sum of N5,000,000 (five million naira) only, as donation towards the Public Presentation and Launching of the Book earlier noted at paragraph 1 above, please”.