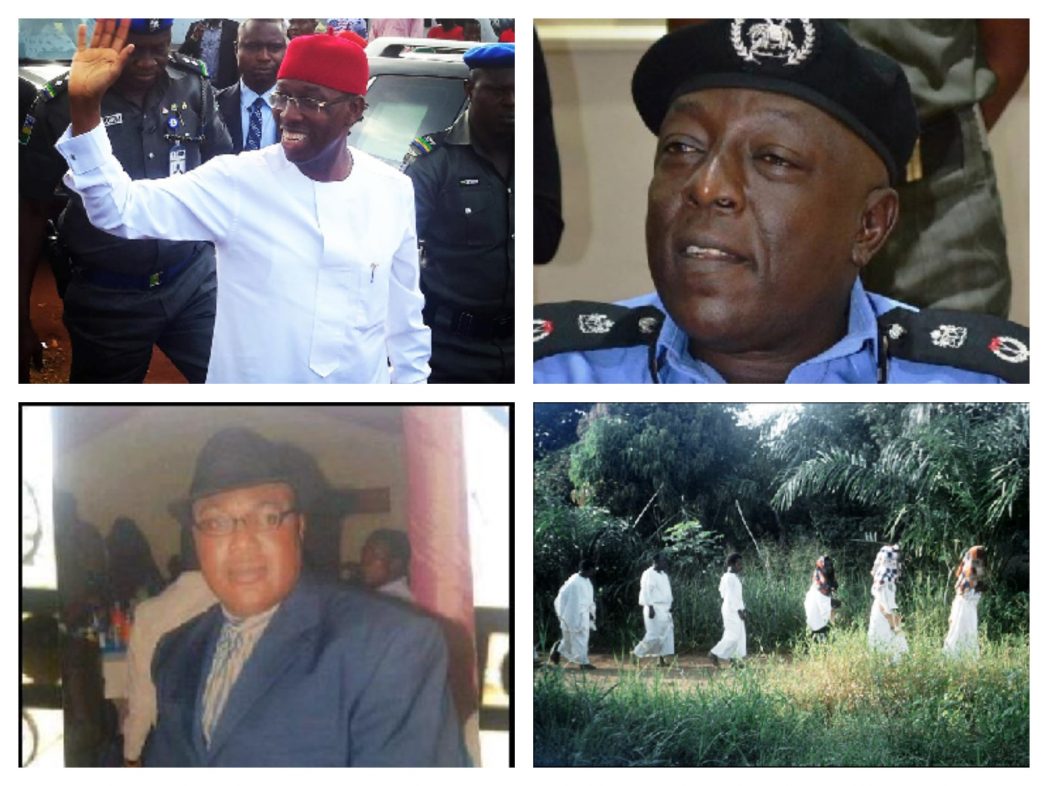 BATTLE OF THE GODS: DELTA CP IN CONSPIRACY WITH OGBONI MEMBERS TO IMPOSE ONE OF THEIR OWN AS ASABA KING; WHILE GOV. OKOWA LOOKS AWAY

Except the Delta State Governor, Ifeanyi Okowa intervenes quickly, he may have to spend all his security votes settling the war that may ravaged the capital city soon.

Secret Reporters has gathered authoritatively that there is a silent battle going on within Asaba on who should be the next Odogwu of Asaba. Investigations carried out by us revealed that the stool is rotated among five communities that make up the place namely Umuezei, Ugbuomanta, Umuagu, Umuaji and Umuonaje. The last Odogwu was from Umuaji and the new Odogwu ought to emanate from Umuonaje.

After the burial of the deceased Odogwu, the Palace sent a letter to the community to submit the name of the person they want as Odogwu and they were given six weeks. The name of Nwanze Oduah was sent to them on May 2016; after he was prayed for by the oldest man in the village and a date was fixed for traditional rites and coronation. The traditional law stipulates that once a person is selected, it can’t be changed.

Then the bubble busted, as the day set for such never came. Meanwhile the regent who happens to be the son of the last Odogwu told the palace chiefs to come and get the staff of office called Ikenga which is the Ofo, from his father’s house and give to the rightful, as it has caused five members of his family to die, since no one was worshipping it, as demanded by custom and tradition.

When no one came to get it, he went to the bush and threw it away. As a result of its powers, no one could touch it and Nwanze was asked if he could. He went with the titled men to the bush, picked the Ikenga to the surprise and admiration of all, who made verbal comments that the gods had truly chose him.

This medium however gathered that the delay of not swearing him in came from the Iyase of Asaba, Isioma Onyeobi who is desperate to become the Odogwu. To achieve his aim, he conspired with the immediate past Commissioner of Police, Ikechukwu Aduba to prevail on his successor, Zanni Ibrahim to arrest the Odogwu-Elect for ‘stealing’ the Ikenga, which was done.

Following is arrest, the regent came to the Police Headquarters to write that it was not stolen from his house, but willingly given as customs and traditions demanded. The interest of Aduba in the case we gathered is due to the traditional title conferred on him when he served as the CP.

The Iyase mounted pressure on the CP to tell Nwaeze to write a statement that once he’s released, he will return the Ikenga back to vigilante for keep, pending the outcome of the crisis, a suggestion he refused. We were reliably informed that if he does so, the gods will kill him, as the Ikenga must not leave the house of the Odogwu unless he dies. The Red Cap chiefs who are the custodian of the tradition are insisting that he should be crowned the king formally.

Investigations carried out by Secret Reporters revealed that some members of the traditional palace are members of the Ogboni Confraternity and they want one of their own to be the Odogwu. The man that falls within their specification is the Iyase who is also a member of the occult group.

The Asagba of Asaba who has been sick for over a year and in the US undergoing treatment is also a member of the group and is said to be the leader of the cabal that has held the people hostage. A source revealed that the DLA road has been awarded to him twice by the state government but it was abandoned, while Shoprite and Second Niger Bridge slots given to him and his cabal members were not given to indigenes of the community but sold out to people from across the Niger.

“It is now a battle of the ogboni and the Asaba deity, even though we are hoping that the state governor will wade into the issue to stop bloodshed that may happen if this crisis should linger”, a prominent native told us.

The Odogwu-Elect has been granted bail.

Previous THE CARNAGE IN SOUTHERN KADUNA MUST END
Next MADAM TOO HOLY: SGF AND VP FIRES NIGER DELTA POWER HOLDING COMPANY BOSS WHO STOPPED THEIR CRONIES FROM LOOTING