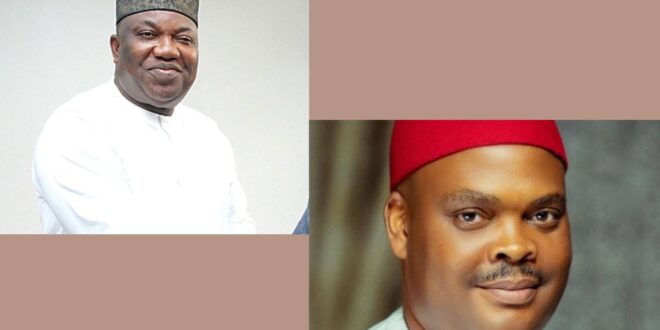 In most of Nigeria’s States, including Enugu, the practice of granting contracts to conies with possible vested interest has reached frightening proportions. This illegal act has largely contributed to the fact that the wealthy continue to get richer and the poor continue to get poorer.

Data mined by Secret Reporters from the Enugu State government 2020 bank records have revealed that Ifeanyi Ugwuanyi’s administration in the Enugu state gave a contract running into multimillions of naira to Aroh Chidi through the commissioner’s company, Libra Resources Limited.

The commissioner for lands, on November 13, 2020, received the sum of N53, 084,322.76 via his firm, Libra Resources Limited registered on 25, October, 2000, from the government’s UBA bank account, 22173355534. The payment was made using the check number CHQ 5069 for the company situated at PLOT323AZ, WUSEII, ABUJA, whose current tax payment status on the CAC portal is inactive, which implies tax evasion – a crime against financial regulation law.

The act, which further violates section 32 (34) of the Enugu State Procurement Law, which states that anyone involved in the preparation of a procurement or part of the proceedings may not bid for the procurement in question or any part of it, either as the main contractor or subcontractor, and may not cooperate in any way with bidders in the course of preparing their tenders, also violates section 9 of the code of conduct for public officers, which stipulates that: A Public Officer shall decline in serving in a procurement process if any of the Bidders or Service Providers engaged in the procurement proceedings is related to him by blood, marriage or grant relationship or where the success of a particular Bidder or Service Provider in the proceedings will confer a pecuniary or other advantage on him.