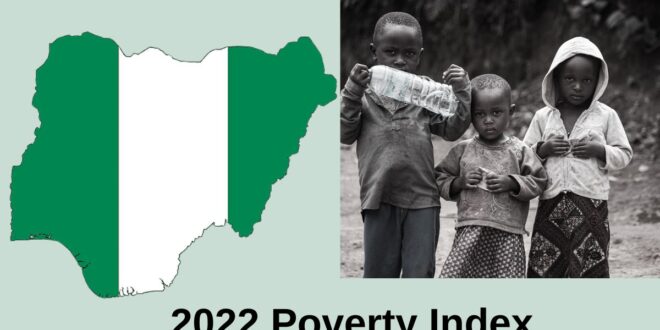 In light of the release on Thursday of the 2022 Poverty Index of Nigeria, which was published by the Federal Government through the National Bureau of Statistics, revealing that 130 million Nigerians currently are considered to be poor, it is important to quickly review the role of corruption as one of the four major causes of poverty in the most populous black country in the World and how it is being carried out through contract scam by politicians and civil servants.

The NBS stated that the 130 million figure represented 63% of the country’s population in the 2022 Multidimensional Poverty Index Survey, which was announced in Abuja.

The Multidimensional Poverty Index (MPI), which has five components including health, living standard, education, security, and unemployment, was reportedly utilized to calculate the statistic.

The survey showed that over 50 per cent of children across the country are affected by poverty.

Nigeria has been plagued by political corruption from its inception. One of the main factors contributing to Nigeria’s poverty is this corruption. Government representatives frequently divert payments from oil firms that are intended for public trusts payments that can frequently reach more than $1 billion into their own personal bank accounts.

The underprivileged and disadvantaged masses of Nigeria are unavoidably harmed when government officials commit this form of corruption. If these significant sums of money did not end up in the pockets of government officials, the Nigerian government could use that money to improve the national infrastructure, including its roads, electricity, running water, and more.

SecretReporters has published reports on corrupt incidents involving public officials and politicians in all 36 states across the country. The practice of using contract scams to divert public funds makes it difficult for ordinary Nigerians to access fundamental necessities like good education, security, and sources of income that could raise their standard of living.

The lack of economic infrastructure, poor access to healthcare, and poor access to education are the three other major factors contributing to the nation’s rising poverty index with corrupt politicians and civil servants all to blame for most of these issues.

Several exposés published by SecretReporters over the years have demonstrated that one of the primary ways that corruption occurs in Nigeria is through the awarding of fictitious contracts. The use of fictitious companies to launder money, the granting of contracts to cronies to maintain the wealth of the country in the hands of the wealthy, and other money-laundering schemes by politicians and civil workers have all been made public. They perform all these things in contravention of both civil service and public procurement rules but rarely face charges.