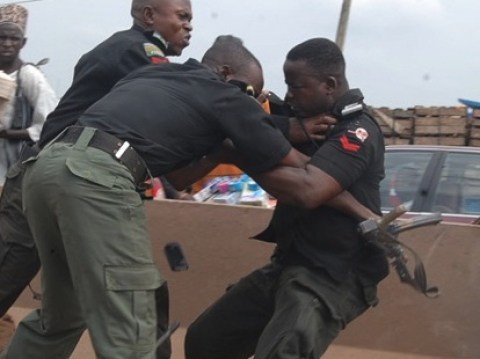 THE DILEMMA OF A NIGERIA POLICEMAN

Saddled with a great responsibility of National interest, encumbered by the enormous task to effectively deliver a service he has been called to render. Leaving all behind including the love of a wife and children, to attend to the need of a community not even a close relative of his belongs but total strangers he may not even have any affiliation. Daily his routine began, mostly from one duty over the night to another running through the day, with the heavy weight of not having necessary logistics to work in proportion to the desired results expected of him.

Beginning with his accouterments comprising uniform, belt, button, rank, beret, booth, etc, he has to buy from his meager salary to the official equipment he needs to work with left to his personal care and maintenance. From a patrolman who is expected to indulge in extensive visible patrol to ward off criminals without a dime to fuel the vehicle he patrols with. The maintenance nobody is interested to inquire what needs to be done, the sudden call to savage a security threat within a community using non-serviceable vehicle on which a miracle cannot be performed to a charge-room officer who everybody care-less about how he gets all the registers expected to be maintained for records. The invitation of suspects that will require the available police officer to go for, most time the distance not trekable yet available Police vehicle to convey him to the scene.

The Police cell that needs to be kept clean using detergents and disinfectant to ensure the sound state of health of suspected criminals awaiting court trials to which no dime has been apportioned. The station environments that need to be kept clean using brooms, mobs and other instrument nobody has provided. Talk about the investigation teams and the stationery comprising statement forms for suspects/complaint/witness, detention order, bail bond, medical forms etc. Nobody cares where he gets them from, when he is not a printing press. Even the prosecution of suspects which is nothing but a nightmare considering all financial expenses involved ranging from several journey that needs to be made for accurate investigation and facts to be gathered for the prosecutions.

Not to talk of when it entails traveling outside his domain, sometimes inter-state for the arrest of other suspects as relating to a case or retrieval of evidences, the financial implication no one cares to know in comparison with those at the Senate and House –of Rep. whose travelling allowances are made ready with flight tickets and hotel accommodation bookings already purchased and made readily available weeks before embarking on any official journey, many times he has to sleep at the motor park if no members of his family resides within or relative to spend the night with, Well, if all the above mentioned could not be catered for, mentioning his feeding is inconsequential notwithstanding its importance considering the adage of “ A HUNGRY MAN IS AN ANGRY MAN “. My hands are already weary over writing on the dilemma of a Nigeria Policeman because it is so pathetic my heart cannot curtail it therefore it wearies the heart that write.

But for the love of the noble profession and the passion for a change to be effected, I will proceed,

As it is my earnest desire for the public to really understand the plight of a Nigeria Policeman not to cover up the excesses of some incorrigible ones but for the general issues to be addressed which may also reduce the illicit activities of the bad eggs that rubs mud on the efforts of a Nigeria Police man. Mentioning the administrative section of a typical Police division, a Nigeria Policeman is posted, from the office stationary to other equipment like the computer, printers, photocopier (if any at all) etc. for the smooth running of the office, is totally dependent on other sections who makes daily/weekly contributions from only God knows where they get the money from. We do not forget the returns that needs to be  rendered to the higher offices; the Area Commands and Command Headquarters which comes inform of money, stationary, contribution towards a national or departmental assignments.

Oh my heart breaks for the Nigeria Policeman, when he has to travel to another state for a duty as important as election duty, where he has to transport himself to a point of convergence which most times involves kilometers exceeding 50km. After the election duty, he will be left to find his way back to base not minding if he had any money left on him after feeding during the period of the election. And if by error of omission or commission fails to report back at a specified time; he will be disciplined for circumstance he could hardly control. He has to process anything relating to his welfare, promotion, emoluments, lodging allowance, even leave, he has to make some payment to facilitate the process, otherwise it remains undone. Will you blame the other Nigeria Policemen at the other end?

Not really, because the plight he goes through same, as the other Policeman that needs to process his welfare, He becomes totally helpless. In order to ensure he performs his duties to avoid disciplinary action against him, he figures out ways like a common magician to proffer solution to his plight.

Doing that has brought about a stigma he carries about like Lazarus with sore on his legs, the people he is improvising to protect by compromising his principles avoiding him like a plague, leaving just a handful who feel a little pity for him because of the favour they stand to get in return when they have to wringle themselves out of a Police case.

Helplessly he goes about his job with a heavy burden on his heart within and his shoulders invisible to the eyes. Had the burden be that of his lovely children or wife, It would have felt so relieving though heavy for the love of his family, But the burden he bears for those who holds him in contempt for the inconveniences he causes them when performing his magic.

Would you blame the contemptuous fellows?

That would be irrational, considering the struggles they go through to get what is being requested of them

Or is it the manner at which the Nigeria Policeman gets what he wants even when he knows it’s illegal?

Now who is to be held responsible for the dilemma of a Nigeria Policeman finds himself entangled in?

Looking within his organization could it be that the authority that needs to protect his interest turns their eyes away from his plight?

Or the authority is self-interest inclined and deliberately inflict pains on the Nigeria Policeman?

Looking without to the Federal government, to whom he is generally accountable it makes it all but cloudy is the plight of this helpless officer that the hope of savaging him is far beyond reach thereby rendering him to a state of servitude in the guise of Service.