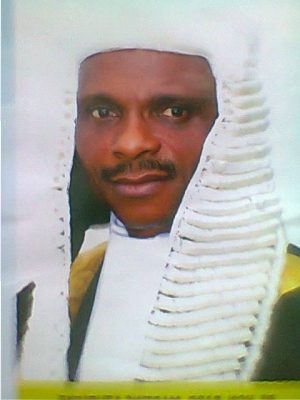 The former Speaker of Abia 6th Assembly and Member Representing Isiala Ngwa North State Constituency in Abia State House of Assembly, Rt. Hon. Martins Azubuike has described his removal from office as a thing of the past as he is now poised to face the first line charge of his election into the state Assembly which is quality and qualitative representation of his constituents.

On the reasons why his colleagues moved against him, Rt. Hon Azubuike insist he did not commit any impeachable offense known to him, neither was he served any impeachment notice as to ascertain their grievances but told the youths he is not willing to pursue the matter as he had already handed over all to God Almighty as a good Christian. He told the audience that he bear no grudges against any of his colleagues and Honourable House Members, describing them as his friends despite all that happened on or before the 29th day of December, 2016.

He however debunked the news trending in both Newspapers and Social Media that it was all about sharing of allocation/money as that issue has not come up anywhere, ascribing it to the imagination of the writers and promoters since such a claim did not originate from him and wondered why some people are bent on fanning the embers of hatred that can only heat up Abia serene polity which has been largely peaceful.

The former Speaker admonished the Umunneato Ngwa Youths to always support Governor Okezie Ikpeazu led administration for his giant strides, successes and efforts in the various sectors of the state economy. He further urged them to remain strong and committed to the People’s Democratic Party (PDP).

Earlier in his speech, President of the group Chidiebere Ukanwoko, said they came to identify with the former Speaker for his achievements and leadership qualities as the leader of Abia 6th legislative House all through the period he served the State in that capacity, stressing that the group is proud of his leadership style, humility and loyalty to Governor Okezie Ikpeazu led government.

They lauded Rt. Hon. Azubuike for his youths friendly initiatives and the projects he carried out in Abia State and Isiala Ngwa North in particular, noting that the bursary Award to 100 undergraduates, promoting reading competition amongst Secondary School Pupils through quiz and debates, Football Competition, Renovation of dilapidated school buildings, building of market stalls are all the projects that made him an outstanding representative of the people.

In her vote of thanks, a Member of the group, Miss. Chiamaka Nwannennaya thanked Rt. Hon. Martins Azubuike for playing host to the group while assuring him of the groups’ readiness to partner with him in all his future activities.