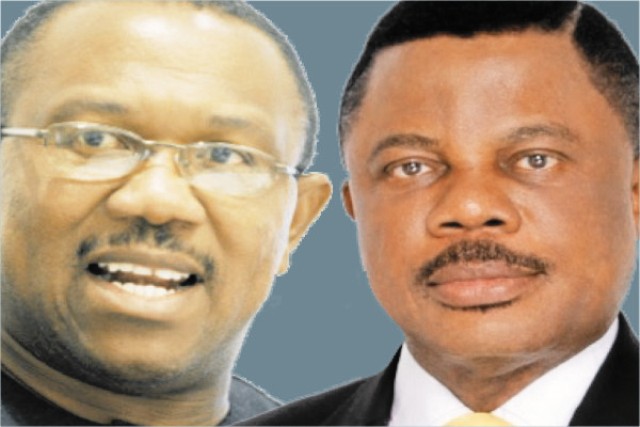 THE GAME OF OUTWITTING BETWEEN PETER OBI AND VAL OBIENYEM

The setting was the informal people’s parliament that takes place regularly at Arroma Junction, Awka. On the evening of Saturday, November 21, 2015, folks who were gathered around the newspaper vendors’ corner wondered why Messrs Peter Obi and Valentine Obienyem had chosen to demean their persons with the stinking lies they were telling against Governor Willie Obiano and his government.

‘This man and his boy think Ndi Anambra are idiots. Look at the rubbish they’re writing here that Obiano squandered Obi’s savings. What savings! Savings made from his cheap article mentality. Go and see the alarming rate his low quality roads are collapsing. So if Akpokuedike awards contracts to bring those roads to standard, it becomes mismanagement.’

The fellow sighed with disgust. He was being asked to disbelieve the evidence of his eyes. Everyone could hear the buzzing of the bulldozers as men and machines progressed with the flyover that would ease traffic flow and enhance road safety on the busy highway.

‘Don’t mind that selfish trader’ an elderly man among the crowd said. ‘The same man who says his savings have been wasted has been harassing Akpokuedike to pay him N7billion in the name of election expenses. Is that not the worst type of godfatherism? Even Eselu never demanded half of that amount from Ngige? Don’t you agree Doc?’

The man called Doc, a lecturer at Unizik, looked up from the newspaper he was reading. ‘Is it today I started telling you people that Peter Obi wants to be the only man standing? He is the only wise man, the only achiever, the only great man. Look at the kind of lies they are telling to run Obiano down. He imported gold bed; gold handkerchief; gold tissue; gold toothpick. Since Obi has three eyes and sees more than all of us, let him tell us the companies where these things were ordered from, the dates of importation and individuals involved.’

Doc paused for breath and continued. ‘I’m sorry for that young man Val that Obi is using to prosecute his dirty schemes. His future is being compromised. He runs the risk of having his identity as Peter Obi’s hatchet man.’

‘From what I’ve heard of that chap, he may be the one using Obi and not the other way round’ the elderly fellow cautioned.

‘What do you know? Tell us,’ two or three different voices solicited.

‘You know I’m from Nnewi. If you see the kind of fabrications Valentine cooked up against Mama Anambra and Emeka Etiaba in the newspapers, you will realize the young man is a pathological liar. He also lied against the House of Assembly sometime in 2007 and later wrote a letter of apology.

‘Is that so?’ asked a listener.

‘Yes. The Clerk, Walter Adogu read Valentine’s apology to the members. Valentine operates the strategy of saddle your opponent with false accusations and let him struggle to disprove them. That is the way he handles his media job. The question to ask is why Peter Obi still retains him with all the trouble he brings Obi.’

‘Let me tell you my understanding of what is going on’ said a middle aged man who had been quiet since the conversation began. ‘You have a frightening partnership in Peter Obi and Valentine. Obi is using Valentine and Valentine is also using Obi. In pushing for what he wants, Obi can be as ruthless as Valentine can be unscrupulous. Obi uses Valentine to hit at opponents and Valentine exploits Obi’s appetite for vengeance to make money. ‘

‘Let me help you’ Doc intervened. ‘Obi is a very ambitious man. He does not want to be in the back seat anymore. Publicly, he tries to be self – effacing but he actually wants to be the talk – of – the – town. Realizing this, Valentine began to give Obi the massage – type – of – publicity. Today, Obi is hooked on media publicity like a cocaine addict to his drug. His pictures appear in the newspapers more than that of many governors. And that guarantees a lot of money entering Valentine’s hands.’

‘You’re coming back to my analysis Doc’ the elderly man resumed. ‘Obi approves of the calumny and falsehood Valentine dishes out. That is why he won’t sack Val. And Valentine enjoys what he is doing because he is vicious and because of the money at his disposal. So, if you ask me, they are ruining each other.’

I drove off, thankful that Ndi Anambra would not allow themselves to be deceived by the propaganda of an aspiring godfather.