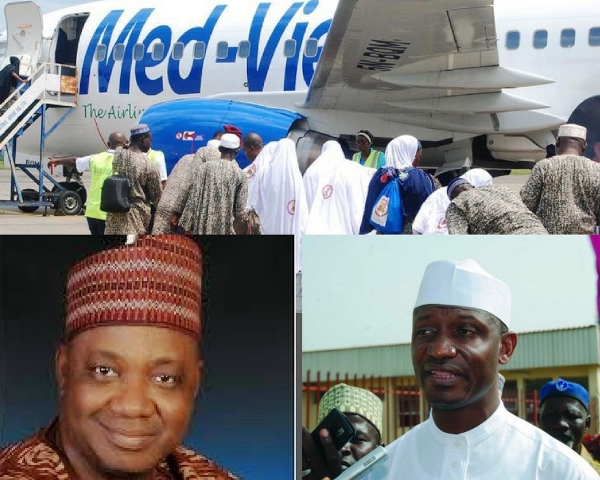 PILGRIMAGE OF FRAUD: HOW FORMER VP NAMADI SAMBO & CHAIRMAN OF NAHCON PULL OUT BILLIONS THROUGH CONTRACTS IN HAJJ COMMISSION USING THEIR COMPANIES

Religion is the opium of the masses while its merchants devise absurd ways to milk dry its followers, and share the chunked profit amongst a selected few. It is not a hidden fact that religious ventures in Nigeria are highly profitable, that’s why it’s a crazy scramble, with some going off limits to profit from it. The many fraudulent operations going on in the Hajj Operations was brought to the notice of Secret Reporters.

A civil society group, CATBAN is unearthing the discreet reasons why the NAHCON Chairman dropped 33 companies and engaged only 8 companies in 2017. Documents available to the group revealed Shuraka’a Alkhair Group Co Ltd, a company alleged to be fronting for the Chairman has been the beneficiary of over 65% contracts and services in Hajj operations under his tenure.

Categorically speaking, our dependable source clearly explained why the company has been enjoying the highest number of contracts in Hajj Operations. He revealed that it was because of the fact that former VP Namadi Sambo brought the company and Chairman of NAHCON to Hajj Commission.

In our findings, Shuraka’a Alkhair is owned by a Nigerian but operated by a man from Niger Republic who only has a Power of Attorney to run the business.

In the recent past Hajj Operation, this company alone was awarded the job to accommodate & feed thousands of Pilgrims from 20 States of Nigeria.

On interrogation of the Chairman on “why Shuraka’a Alkhair alone dealt with 20 States?”, he claimed that the States choose their contractors not the Chairman.

Prior this, it was discovered that NAHCON is imposing the same company. It reflected in the Details submitted through CATBAN petition to the Senate Adhoc Committee and Anti-Corruption Agencies.

The leaked documents show how the contracts were awarded and executed. The alarming speed in which contracts or requests of payments were done in favour of the company in question tells one that there is a conflict of interest.