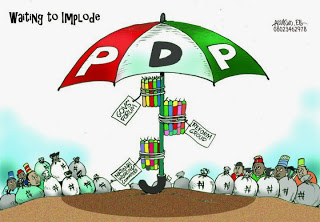 PDP SPLITS! NEW MEGA PARTY FORMED AS JONATHAN’S MEN WALK OUT ON HIM

A faction of the Peoples Democratic Party (PDP) and that of the All Progressives Grand Alliance (APGA) on Tuesday pulled out of the two parties and floated a new party known as the Peoples Mega Party (PMP).

Members of the factions who attended the maiden National Executive Committee (NEC) meeting of the PMP held at Sheraton Hotels, Abuja, ‎all adopted the convener, Chief Perry Opara, as the protem chairman of the proposed party.

Chief Opara who led the PDP faction was an aide to former political adviser to Goodluck Jonathan, Alhaji Ahmed Gulak, who recently filed a suit against the PDP and the then acting national chairman, Prince Uche Secondus and secured a judgement ordering Secondus to vacate office as acting chairman on ground that his acting role had elapsed.

The APGA faction was led by Chief John Agbara, who addressed NEC members saying: “after a wide consultation, we have decided to collapse the structure of APGA to PMP today.We are today full members of ‎the PMP.”

The proposed party adopted human picture as its logo while its slogan is: “Forward Nigeria.”

Addressing the crowd, Opara said the need for the Peoples Mega Party (PMP) was informed because of leadership crisis within the PDP which had impacted negatively on its glory and future.

“It does not mean that it is only people from the PDP, we have APGA chairmen from many states of Nigeria identifying with the new party, people from Labour Party (LP) and the Accord Party (AP). There are also disenchanted people from the APC that feel that they want a new place and that is what it is. Today marks the birth of this new party,” he said.

Previous AS POVERTY LOOMS IN THE LAND, PRESIDENT BUHARI ENTERTAINS HIS SOUL WITH SCOTTISH PIPERS AT ABUJA AIRPORT TO SCORN COUNTRYMEN
Next 24HOURS AFTER SECRET REPORTERS EXPOSED DESOPADEC EXECUTIVE DIRECTOR OCHOR OCHOR FOR DIVERTING CASH; HE MOVES TO SACK AIDES